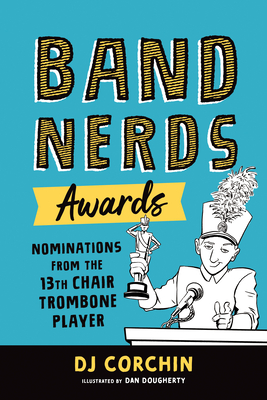 Move over, Pulitzer! Get out of the way, Nobel Prize! The most prestigious award of the century is calling. Don't miss another laugh-out-loud installment in the 13th Chair series by DJ Corchin!

The Marching Band Nerd Awards are not your typical awards. But do any other awards even matter? Could you win the award for the Most Texts Sent During Rehearsal? Or the Fastest Person with a Tuba award? Most Creative Use of a Saber? Or the award for the Largest Spit Pool? These hilarious awards will have band nerds of all ages picking winners.

DJ Corchin is an award-winning children’s book author and illustrator. He uses his unique humor and wit to focus on socially conscious messages involving kindness, communication, and emotional awareness. He currently lives and works in Chicago, IL.

Dan Dougherty is the writer and illustrator behind several comics and children’s books. When he isn’t making comics, Dan teaches how to make them at the International School of Comics in Chicago.