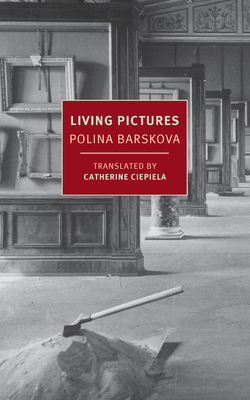 A poignant collection of short pieces about the author's hometown, St. Petersburg, Russia, and the siege of Leningrad that combines memoir, history, and fiction.

Living Pictures refers to the parlor game of tableaux vivants, in which people dress up in costume to bring scenes from history back to life. It’s a game about survival, in a sense, and what it means to be a survivor is the question that Polina Barskova explores in the scintillating literary amalgam of Living Pictures. Barskova, one of the most admired and controversial figures in a new generation of Russian writers, first made her name as a poet; she is also known as a scholar of the catastrophic siege of Leningrad in World War II. In Living Pictures, Barskova writes with caustic humor and wild invention about traumas past and present, historical and autobiographical, exploring how we cope with experiences that defy comprehension. She writes about her relationships with her adoptive father and her birth father; about sex, wanted and unwanted; about the death of a lover; about Turner and Picasso; and, in the final piece, she mines the historical record in a chamber drama about two lovers sheltering in the Hermitage Museum during the siege of Leningrad who slowly, operatically, hopelessly, stage their own deaths.

Polina Barskova published her debut when she was only eight years old. She has lived in the United States since 1998. She studied classical philology in St. Petersburg and Slavic studies at the University of California, Berkeley, where she currently teaches. Apart from her extensive poetic work—eight volumes of poetry published since 1991—she dedicates her work as a literary scholar and editor to the poets of the siege of Leningrad.

Catherine Ciepiela is a professor of Russian at Amherst College and translator of Russian literature. She is the author of The Same Solitude, a nonfiction work about the epistolary romance between Marina Tsvetaeva and Boris Pasternak, which received the AATSEEL Prize for Best Book of Literary/Cultural Criticism in 2007 and was named an Outstanding Academic Title by Choice.

Eugene Ostashevsky is the author of the poetry collections The Life and Opinions of DJ Spinoza and Iterature, both published by Ugly Duckling Presse. He is the editor of OBERIU: An Anthology of Russian Absurdism, the first collection of writings by Vvedensky and friends in English translation. Ostashevsky teaches in the liberal studies program at New York University.

"As narrator and guide. . .Barskova makes the unprocessed grief come alive. She spins it into non-narrative and non-linear poems and prose, a pastiche which mimics the very nature of traumatic memory: disassociated and halting." —Tanya Paperny, Literary Hub

"A haunting and magnificent debut fiction collection. . . . This beautiful attempt to reconstruct the lives of the lost, blended with an account of a new life built from the rubble, deserves a wide readership." —Publishers Weekly starred review

"These fractured poem-stories are composed of disjunctively arranged images, slices of memory both personal and historical, and a shadowy array of citations of varying levels of obscurity and recognizability, creating unique prose tissues that carve out a space for themselves in an ambiguous zone between critical essay, autobiography, poetry, and short fiction. What is unambiguous is their success: They are extraordinarily powerful works, at turns densely evocative and dizzyingly erudite, doing many of the best things that writing can do. Barskova, following the method of her poetry, manages by painstaking technique and sheer force of image to ponder herself considering the Siege and its survivors, drawing from life and art to represent an experience of personal trauma mediated by communication with history." —Jack Rockwell, Full-Stop

"Living Pictures is a highly poetic book about memories of a Soviet childhood and a reinvention in the USA, with interludes of a choir of voices from St. Petersburg. Polina Barskova’s prose elegantly joins all the genres to create a new narrative form." —Christine Hamel, WDR

"A genre-bending story featuring memoir, art criticism, and the story of two lovers stuck in the Hermitage during the blockade" —Matt Janney, Calvert Journal
About Kobo eBooks