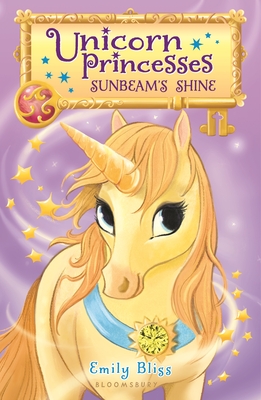 This is book number 1 in the Unicorn Princesses series.

Welcome to an enchanted land ruled by unicorn princesses!
Cressida Jenkins, a unicorn-obsessed girl who is sure that unicorns are real, is invited to visit, and readers will be thrilled to journey to the Rainbow Realm along with her! In each story, Cressida is called to help a unicorn princess and her sisters in a magical adventure.

In the first story, a blundering wizard-lizard casts a spell that accidentally robs Princess Sunbeam of her magic yellow sapphire. Without it, she loses her powers--the ability to create light and heat. The only way to reverse the spell is for a human girl who believes in unicorns to find the yellow sapphire and reunite Sunbeam with her gemstone. Sunbeam ventures into the human world and enlists Cressida’s help, who is thrilled to visit the Rainbow Realm. But finding Sunbeam's sapphire isn't quite as easy as she thought it would be . . .

This sweet series is full of sparkle, fun, and friendship.