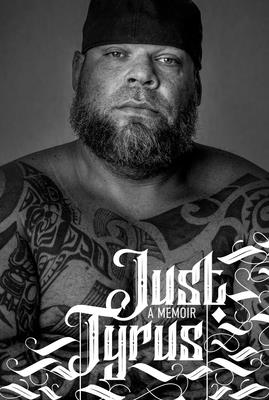 Pro wrestler and political commentator Tyrus goes deep into his wild but triumphant life story, from his painfully dysfunctional upbringing to bodyguarding for Snoop Dogg, to becoming a wrestling icon and one of the most provocative on-air voices today.

“The author relates all of his adventures through a series of vividly memorable anecdotes…. A revealing glimpse of a multifaceted entertainer who defies easy labeling.” —Kirkus

“I loved Just Tyrus. I read it in one day and cheered for him when I got to the end. Tyrus has written a book that is at once raw, tender, intelligent, candid, and hilarious. Tyrus took a very rough start to his life and used perseverance, confident humility, and accountability to land firmly on his feet. What a triumph!” —Dana Perino, former White House Press Secretary to George W. Bush and Fox News anchor and host

The product of a 1970s mixed marriage, George Murdoch learned to fight early in life, fending off both race-baiting bullies and the demons of a dysfunctional home. Couch surfing all through high school and most of college, the quick-witted, sharp-tongued giant played football, ran drugs, and bounced at clubs to try to survive. After a false start with the WWE, he eventually became Snoop Dogg’s bodyguard and traveled the world with the hip hop legend, biding his time and honing his rap. When the WWE urged him to return, George became “Brodus Clay” and, for the next several years, reinvented himself numerous times under the watchful mentorship of the legendary Dusty Rhodes, “the American Dream.” He was eventually christened “Tyrus,” and shortly after, a chance social media encounter with Greg Gutfeld at Fox News resulted in Tyrus finding a new skill: sage social commentator. Ferociously funny, blunt, and tenacious, Just Tyrus traces his unlikely and spectacular rise. As always with Tyrus, it’s in-your-face and offers no apologies.

“George aka Tyrus aka the realest most blunt human being on the face of planet earth. Never had a problem telling you what was on his mind or how he felt, good or bad. Tough exterior but a heart of gold. Front liner, great friend, and excellent coach for my youth football team. His work ethic is obvious, taking him from football to bodyguard to pro wrestler to a superb personality on Fox News. I’ve seen him climb the ladder of success, and I’m happy that I was along for the journey.” —Snoop Dogg

A 6'8", 350-pound behemoth, Tyrus is an affable, hardworking entertainer with a sly sense of humor. Following his initial calling to football, he became a bouncer at numerous establishments in Los Angeles where he caught the attention of Snoop Dogg and became his bodyguard. That drew the attention of the WWE where he went on to enjoy success as “Brodus Clay,” and later, “The Funkasaurus,” which led to his starring in Mattel commercials and appearing in WWE video games. Along with working as an actor in film and television, he is a frequent featured guest on Fox News and The Greg Gutfeld Show.

“The author relates all of his adventures through a series of vividly memorable anecdotes…. A revealing glimpse of a multifaceted entertainer who defies easy labeling.”
— Kirkus
About Kobo eBooks