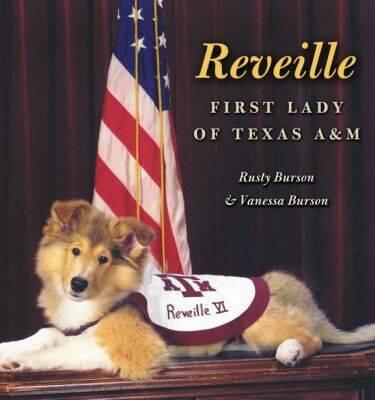 "I went to Yale. There, a bulldog was the mascot, but somehow, the jowled bulldog's status got diminished over the years, while Reveille lives on, sparking the Aggies on to greatness. Go Reveille!"—George H. W. Bush, former President of the United States

Reveille needs no introduction to Aggies; she is the First Lady of Texas A&M—surrounded by traditions, honored and privileged anywhere on campus. She is a goodwill ambassador as well as a mascot, a symbol of Aggieland as well as the highest ranking

officer in A&M's Corps of Cadets. Her lifestyle, accessibility, and popularity combine to make her, above all, among the most widely beloved dogs in the country.

This richly illustrated book traces the history of Reveille, from the first mutt of uncertain origins to Reveille VII, an American collie of purebred lineage and scientific breeding. It tells the collective story of the lives of Reveille at Texas A&M: Reveille's life in the dorm and her privileges in classrooms; the dog-napping by in-state rivals that made national news in the 1990s; and her effect on the lives of those who have shared the campus with her, cared for her, and loved her.

A visible part of university life throughout the year, for many students Reveille is the pet they left at home. Rusty and Vannessa Burson have gathered anecdotes, statistics, and pictures that tell the little-known story of a well-known dog: her origins, tales and

traditions, antics and adventures, and evolving role. It is the story of special dogs, caring people, and a legacy shaped through the decades.

The text is accompanied by formal portraits of the successive Revs and candid snaps of her at work and at play. Further spice is added through interspersed facts and figures and quotes from the many people whose lives she has touched.

Like Lassie, Old Yeller, and Rin Tin Tin, Reveille appeals to any dog lover—but she has a special place in the hearts of her fellow Aggies.

RUSTY BURSON, formerly a newspaper reporter and feature writer, is now the associate editor of 12th Man Magazine and the senior development officer for the 12th Man Foundation at Texas A&M University. VANNESSA BURSON served as archival researcher for this book. She is a graduate of Texas A&M's class of 1991. The Bursons make their home in College Station, Texas.
About Kobo eBooks