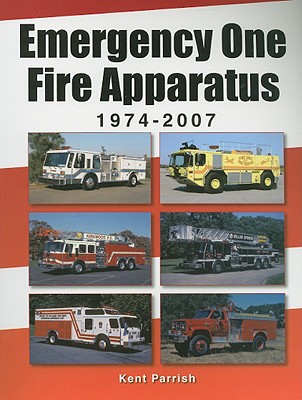 By Kent Parrish
Email or call for price.
Out of Print

From an inconspicuous beginning in Ocala, Florida, in 1974, Emergency One rocketed to the front rank of the U.S. fire apparatus industry in less than a decade. E-One’s astonishing rise stunned its long-established competitors and changed the way fire apparatus was constructed in the United States. E-One’s success was achieved by using pre-built interchangeable modules installed on any commercial truck chassis, and a complete fire truck could be ready in 30-60 days instead of the six months to a year needed by its competitors. E-One's quick upstart allowed them to introduce their own custom cab-forward chassis in 1984, the Hurricane, which was also highly successful. Today, E-One remains the industry’s second-largest player, behind rival Pierce. This book is packed full of colorful photos, and each chapter on various models covers the earliest rigs to today’s beauties.