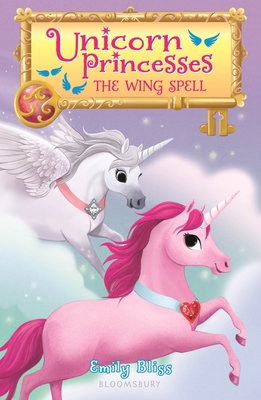 This is book number 10 in the Unicorn Princesses series.

This sweet chapter book series features magical unicorn princesses and the human girl who befriends them.

Welcome to an enchanted land ruled by unicorn princesses! Cressida Jenkins, a unicorn-obsessed girl who is sure that unicorns are real, is invited to visit, and readers will be thrilled to journey to the Rainbow Realm along with her! In each story, Cressida is called to help a unicorn princess and her sisters in a magical adventure.

Princess Feather has just returned from her latest adventure, and Princess Flash wants nothing more to join her sister on her next trip. Ernest the wizard lizard creates a magical pair of wings for Flash, and the princesses invite Cressida to come with them to a new realm. But once there, Ernest's spell goes wrong and creates chaos, and Cressida will have to use all her wits to solve the problem before she can return home.