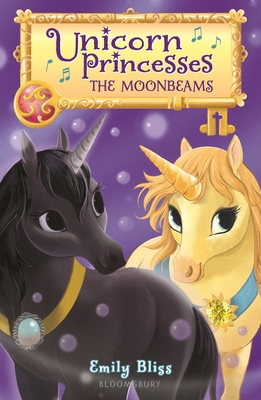 This is book number 9 in the Unicorn Princesses series.

This sweet chapter book series features magical unicorn princesses and the human girl who befriends them.

Welcome to an enchanted land ruled by unicorn princesses! Cressida Jenkins, a unicorn-obsessed girl who is sure that unicorns are real, is invited to visit, and readers will be thrilled to journey to the Rainbow Realm along with her! In each story, Cressida is called to help a unicorn princess and her sisters in a magical adventure.

Princess Sunbeam and Princess Moon have started a show choir with the creatures who live in the Rainbow Realm. They're so excited about their first performance, and it wouldn't be complete without their human friend Cressida in the audience. But Ernest the wizard lizard cast an errant spell that could ruin everything. Can Cressida and her unicorn friends find a way for the show to go on?