The Beast (The Darkdeep) (Paperback) 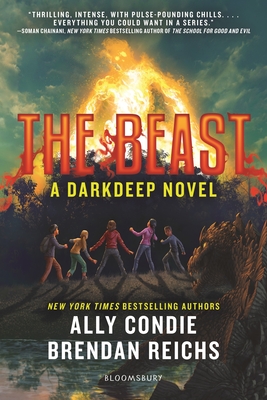 By Ally Condie, Brendan Reichs
$7.99
Email or call for price.

"Thrilling, intense, with pulse-pounding chills . . . Everything you could want in a series." --Soman Chainani, New York Times bestselling author of The School for Good and Evil

Nico, Opal, Tyler, Emma, and Logan survived their worst fears come to life, and saved their tiny Pacific Northwest town of Timbers from a monstrous figment invasion. Now they just want to keep their heads down, enjoy Halloween, and explore the secrets of their mysterious houseboat clubhouse. And also figure out their new Torchbearer responsibilities as keepers of the Darkdeep, an ancient whirlpool hidden in Still Cove that can make both dreams and nightmares into reality.

But when a dangerous new breed of figments starts appearing on their own, and the very environment around them begins to spiral out of control, the friends realize they have no idea what they are doing--or how they're supposed to restrain the Darkdeep. They must uncover the pool's origins, as well as those of the freaky Thing in a Jar, a seemingly lifeless green creature Opal believes is communicating with her. To make matters worse, a trashy YouTube series has rolled into town intent on finding the Beast, the legendary local sea monster suddenly stirring up the countryside.

As threats rapidly close in around them, the friends must fight to protect their secrets, defeat new enemies, and save Timbers and all that they love.

Told from alternating points of view, this chilling sequel from bestselling duo Ally Condie and Brendan Reichs will once again have readers sleeping with the lights on.

“Thrilling, intense, with pulse-pounding chills . . . Everything you could want in a series.” —Soman Chainani, NEW YORK TIMES bestselling author of THE SCHOOL FOR GOOD AND EVIL

“Full of chilling adventures and dark revelations, Reichs and Condie's sequel to The Darkdeep (2018) will satisfy the appetites of middle-grade horror lovers everywhere.” —Booklist

“The alternating points of view will grab readers from the first page and keep them guessing straight through to a satisfying ending.” —School Library Journal

“The most fun I've had while being deeply terrified.” —Roshani Chokshi, NEW YORK TIMES bestselling author of ARU SHAH AND THE END OF TIME

“[P]erfect for reluctant readers who appreciate things that go bump in the night.” —Publishers Weekly

“A delicious, rollicking adventure you won't be able to put down.” —Tahereh Mafi, NEW YORK TIMES bestselling author of FURTHERMORE

“This darkly entertaining tale is sure to engage horror fans.” —School Library Journal

“Condie is at her best . . . grabbing readers' interest from the first page.” —Starred review, Publishers Weekly on SUMMERLOST

“Hooked readers will be tapping their fingers waiting for the sequel.” —Starred review, Kirkus Reviews on NEMESIS

“Have this on hand for readers who enjoy a sweet, heartfelt story.” —School Library Journal on SUMMERLOST

“A fascinating, twisty page-turner that will keep surprising you until its final page.” —Ransom Riggs, #1 NEW YORK TIMES bestselling author, on NEMESIS