Secret in the Stone (The Unicorn Quest) (Paperback) 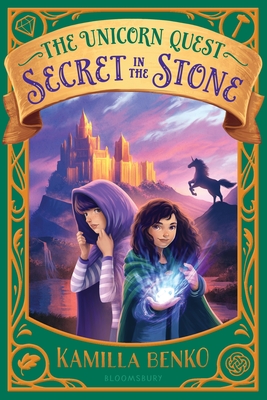 "Hand to readers who love Narnia." --School Library Journal on The Unicorn Quest

* "Those who love Madeleine L'Engle's A Wrinkle in Time or . . . Neil Gaiman's Coraline, can't miss this debut." --Booklist, starred review, on The Unicorn Quest

The second book in an enchanting fantasy series The Unicorn Quest, about a real-world girl and her sister in a land full of magic and strange creatures.

Claire Martinson and her sister Sophie have decided to stay in Arden--the magical land they discovered by climbing up a chimney in their great-aunt's manor. If what they've learned is true, the sisters are the last descendants of the royal family, and only a true heir of Arden--with magic in her blood--can awaken the unicorns.

Since Sophie has does not have magic, the land's last hope rests on Claire. The sisters journey to Stonehaven, a famed Gemmer school high in the mountains of Arden, so Claire can train in the magic of stone. As Claire struggles through classes, Sophie uncovers dangerous secrets about the people they thought they could trust. With Arden on the brink of crumbling, can Claire prove she is the prophesied heir and unlock the magic of the unicorns before it's too late?

Kamilla Benko spent most of her childhood climbing into wardrobes, trying to step through mirrors, and plotting to run away to an art museum. Now, she visits other worlds as a children's book editor. In addition to the Unicorn Quest trilogy, she is the author of the original Frozen novel that bridges the events of Disney's massively successful animated movie and its upcoming sequel. She currently lives in New York with her bookshelves, teapot, and hiking boots.
www.kamillabenko.com
@kkbenko (Twitter)

“Picking up in the midst of danger that never withdraws, this continuation dives deeper into the mysterious legends that make Arden magical.” —Kirkus Reviews

“Hand this series to any fantasy adventure lover.” —Booklist

“Fans of magic and fantasy, especially those who love Madeleine L'Engle's A Wrinkle in Time . . . [or] Neil Gaiman's Coraline, can't miss this debut.” —Booklist, starred review on THE UNICORN QUEST

“Hand to readers who love Narnia.” —School Library Journal on THE UNICORN QUEST

“Rich worldbuilding and high stakes make this a quest worth taking with a protagonist who grows by facing her fears.” —Kirkus Reviews on THE UNICORN QUEST

“Enter and be transported to a lush land full of intrigue, danger, and thrilling magic! Benko's sharp storytelling will keep readers madly flipping the pages in this new, timeless adventure. Spectacular!” —Jennifer Lynn Alvarez, author of The Guardian Herd and Riders of the Realm series on THE UNICORN QUEST

“An adventure-quest brimming with magic and heart. Benko reaches the child in all of us who secretly hopes that a door is never just a door. Mesmerizing.” —Roshani Chokshi, New York Times bestselling author on THE UNICORN QUEST

“The Unicorn Quest draws you into a richly imagined alternate world, keeps you on edge with clever twists and turns, then leaves you breathless as it gallops to its sensational climax!” —Bruce Coville, author of The Unicorn Chronicles series on THE UNICORN QUEST

“Filled with wondrous surprises, fascinating magic, and appealing characters, it hits all the right notes, and I loved every second of it!” —Sarah Beth Durst, author of JOURNEY ACROSS THE HIDDEN LANDS and THE GIRL WHO COULD NOT DREAM on THE UNICORN QUEST

“As dazzling and richly imagined as anything I've read in years. The Unicorn Quest promises to be a must-read.” —Peter Lerangis, New York Times bestselling author on THE UNICORN QUEST