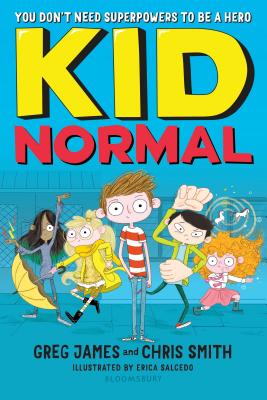 A hilarious, illustrated middle-grade adventure about a superhero with no superpowers!
“Should appeal to readers who enjoy the Captain Underpants and Wimpy Kid series.” - School Library Connection

When Murph Cooper begins his new school several weeks into the year, he can't help but feel a bit out of his depth. And it's not because he's worried about where to sit, making friends, and fitting in. It's because his mom has accidentally enrolled him at a school for superheroes. And unlike his fellow students, who can control the weather or fly or conjure tiny horses from thin air, Murph has no special abilities whatsoever.

But Murph's totally normal abilities might just be what the world needs. Because not far away is a great big bad guy who is half man and half wasp, and his mind is abuzz with evil plans . . . and when he comes after the best and the brightest, it's up to Murph to be the real hero.

With black-and-white illustrations throughout, this laugh-out-loud story proves that heroes come in all shapes and sizes.

Greg James is a familiar voice and face on UK radio and TV. He’s the host of UK BBC Radio 1’s award-winning Drivetime show and Official Chart music broadcast. On screen, Greg has hosted a variety of shows, including the recent special BBC Children in Need, and in 2016 he raised over a million dollars for the charity Sport Relief by completing five triathlons in five cities in five days. He has no superpowers. In his spare time he enjoys the idea of having hobbies, but always tends to turn those hobbies into work.

Chris Smith is an award-winning journalist and broadcaster who delivers the news to millions of people every day as the presenter of Newsbeat on the UK’s BBC Radio 1. Chris enjoyed a previous, glittering, literary career as the winner of the H.E. Bates Short Story Competition 1981 (under-ten category). Chris has no superpowers either, although he enjoys pretending his cat Mabel can fly by picking her up and running around.

“Should appeal to readers who enjoy the Captain Underpants and Wimpy Kid series.” —School Library Connection

“James and Smith show how an unassuming boy can save the day: with equal parts heart and oddball jokes.” —Kirkus Reviews

“The Super Zeroes . . . spring into action and, through teamwork, demonstrate that leadership ability, selfless courage, and people skills are as 'super' as any other powers.” —Booklist

“A great choice for chunking into family or classroom readalouds.” —BCCB