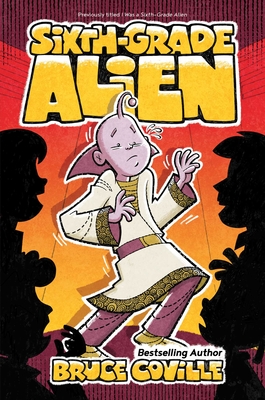 This is book number 1 in the Sixth-Grade Alien series.

Fellow sixth graders, an alien and a human, become unlikely friends in this hilarious, fast-paced, and accessible first book in the sci-fi series Sixth-Grade Alien from the bestselling author of Aliens Ate My Homework, Bruce Coville.

Sixth grade can be tough. But starting sixth grade as the only alien on the planet seems impossible.

When Pleskit Meenom, the son of the first alien ambassador to earth, finds out he’s going to public school, he’s less than thrilled. Especially after what happened on their last planet.

Tim Tompkins, on the other hand, couldn’t be more excited to meet a real alien—even if some of his classmates are warier of the first purple kid in their class. Tim is determined to befriend Pleskit and secretly hopes he may have finally found someone who feels as out of place as he does.

But when angry mobs, cultural differences, and intergalactic plots get in the way, their friendship—and maybe even the planet—could be in danger.

Bruce Coville has published more than one hundred books, which have sold more than sixteen million copies. Among his most popular titles are My Teacher Is an Alien, Into the Land of the Unicorns, and The Monster’s Ring. Bruce also founded Full Cast Audio, a company that creates recordings of the best in children’s and young adult literature. He lives in Syracuse, New York, with his wife, Katherine. Visit him at BruceCoville.com.

Award-winning illustrator Glen Mullaly’s retro-styled illustrations and comics-inspired fun can be found in bestselling author Bruce Coville’s Sixth Grade Alien middle grade series, puzzle and paper-craft work for McDonald’s, publications for Dark Horse Comics, and his own line of fun greeting cards through Northwest Greetings. Glen also worked with Eisner and Inkpot Award–winning comic book artist Ken Steacy on Star Wars children’s books. Glen lives on the west coast of North America with his book-loving wife and their spiral-tailed cat who loves to help Glen with his work by leaving paw prints all over his illustrations whenever she can. Learn more at GlenMulally.com.

Coville develops a sustained mood of excitement and suspense after Tim and Pleskit are captured by unfriendly aliens who plan to take control of Earth and exploit it for themselves. The mystery element works well--the identity of the "bad guys" is not obvious. Coville's characters are sympathetic, especially Pleskit, who is endearing in his desire to get things right, but never quite succeeding. The school scenes are dead-on, and the treatment of politicians and the media is also adept. Coville presents the theme of accepting those who are different without detracting from the action or being overly didactic...reluctant readers will devour this breezy read.
— School Library Journal
About Kobo eBooks