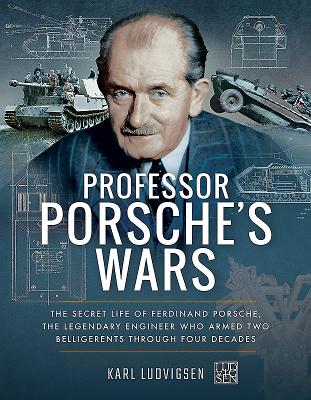 **Endorsements: ** 'Fascinating and meticulously researched.' The Spectator 'The connection between weapons and industrial design is strong at Porsche. This is the subject of an engrossing new book, Professor Porsche's Wars.' Stephen Bayley, Octane 'Ludvigsen approaches the legend from a new and surprisingly rich angle -- the Professor's contributions to military ordnance, the design and production of which occupied him continuously throughout his long career. He produces a compelling tale of a prolifically talented engineer dedicated to innovation and perfection stubbornly battling against the often seemingly impossible constraints imposed upon him.' The Automobile 'Crammed with information, original photographs, illustrations and drawings, we reckon it's an essential addition to any military vehicle enthusiast's reference library.' Classic Military Vehicle Regarded as one of the great automotive engineers of the twentieth century, Ferdinand Porsche is well remembered today for his remarkable automotive designs including the Volkswagen Beetle and Auto Union Grand Prix cars. Yet there is another side to his extraordinary career, for he was an equally inventive designer of military vehicles and machinery. In this field too he excelled. Indeed the sheer versatility of his contribution is astonishing. Karl Ludvigsen's study is the definitive guide. Karl Ludvigsen tells the complete story, detailing Porsche's relations with the Third Reich and the stream of advanced designs for which he was responsible. Among them were the K belwagen, the Schwimmwagen, the Type 100 Leopard tank, the controversial Ferdinand tank destroyer and the colossal Type 205 'Maus' tank. He also describes Porsche's creative work on aero engines, tank engines and even his company's manufacture of the V-1 flying bomb, for which he designed a turbojet engine.
About Kobo eBooks