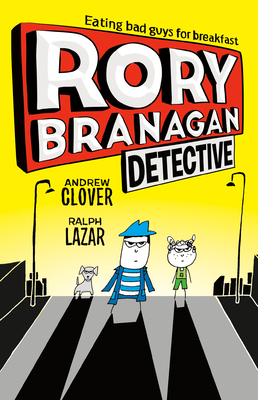 This is book number 1 in the Rory Branagan: Detective series.

"Such fun! And, happily, more to come!" - Kirkus Reviews

Be bold, be curious, be DETECTIVES! The first book in this hilarious crime-fighting middle-grade detective series reads like an extended graphic novel for aspirational readers and devoted fans of diary-style fiction.

Meet RORY BRANAGAN: he eats bad guys for breakfast-well, not actually. But he is the best detective in town. With his canine sidekick and friend, Wilkins Welkin, and his nosy but helpful neighbor, Cassidy Corrigan, Rory sets off on a crime-fighting detective spree. While chasing bad guys and uncovering mysteries with Cassidy and Wilkins, he sets wrongs right and begins to learn more about himself and his relationship with his father. Both hilarious and heroic, this heart-warming, easy-to-read illustrated adventure will leave you wanting to uncover more about Rory and his family.

Andrew Clover is an actor and comic-nominated for a Perrier at the Edinburgh Fringe. He performs his show The Seven Secrets of Storytelling in schools worldwide from the UK to United Arab Emirates working with Authorsaloud.

"[T]he caper hurtles along amid wisecracks, tough talk, suspects, and red herrings aplenty. Readers will . . . thrill to the rough-and-tumble action and applaud the triumphant sleuth’s closing declaration that he’s 'actually a detective.'" - Booklist

"You might not guess, but Rory Branagan is a detective. Rory's dad disappeared seven years ago, and no one will tell Rory why—in fact no one tells him anything. Rory lives with his annoying brother, Seamus, and their mom and Auntie Jo (who is actually just a lodger, not their real aunt); his best friend is Wilkins Welkin, the neighbor's sausage dog. When Cassidy Corrigan (or is it Callaghan?) moves in next door, she suggests Rory become a detective and find out the things no one tells him—and she volunteers to be his sidekick. When "Guinea Pig" Gilligan (father to odd neighbor Connor Gilligan) keels over in the street after eating takeout, Rory and Cassidy are on the case. The detective duo checks out the aptly named Deadly Pirate restaurant, where Auntie Jo works. At first, Rory is laughed at, but the mystery deepens…bad guys, poison octopuses, deception, betrayal…and Mom? Can they sort the case and get Seamus to admit Rory really is a detective? British actor, comic, and writer Clover's foolishly fun detective series ably jumps the pond (there are five of a projected seven out in the U.K.), and fans of 13-Story Treehouse and the like will probably jump for joy. Lazar's scribbly line drawings decorate most pages and often amusingly depict Rory's imaginings. Characters present white. Such fun! And, happily, more to come!"
- Kirkus Reviews
About Kobo eBooks