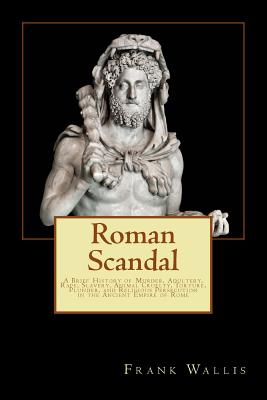 The subject of Roman scandal has been recounted at various points in all histories of Rome, but not in one unified place. Roman scandal often depended on the social class, not to mention the sex, of the perpetrator and that of the victim. As we survey the thousand year history of Rome and its western rump state stumbling into final oblivion in 476, one notes that it ran on the fuel of extreme violence and brutality, such as most modern people in the West have not had to deal with, at least since Hitler was defeated in 1945.

Romans were continuously at war with foreigners, against tribes beyond the pale, and with each other in civil strife, for centuries. When the ruling elite were not plundering abroad to fuel the empire, they were plotting and killing each other in the palace, the Senate, and the Forum. In fact, they often combined the two pursuits all at once. Plunder gave them wealth and slaves, and with wealth came leisure, and in their leisure the Romans chose to entertain themselves with blood spectacles. Men and women fought to the death as gladiators in the Colosseum and hippodrome, and wild animals were killed for fun.

Surely the depravity and excess that took place under the emperors proves not that success and luxury assured the empire's destruction, as Livy feared, but that the empire could function well enough to last several centuries, despite moral and political anarchy at the very top.