Frederik Sandwich and the Mayor Who Lost Her Marbles (Paperback) 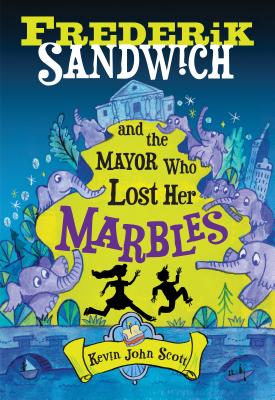 This is book number 2 in the Frederik Sandwich series.

The second book in this delightfully strange and hilarious series perfect for Lemony Snicket and Trenton Lee Stewart fans.

The evil mayor of Frederik's Hill is determined that no one will ruin her upcoming International Midsummer Festival. And town troublemakers Frederik and Pernille are trying to keep a low profile, but seem to have been the source of some pesky zombie rumors that are flooding the town and indeed threatening to do just that.

Determined to turn the spotlight off them, Frederik plans to expose the mayor's big secret—one she has kept hidden for years and involves a legion of valuable statues and an elephant stampede.

But then the worst happens. Pernille goes missing and Frederik learns that her disappearance is a part of the mayor's horrible plan to deport all foreigners from Frederik's Hill. Now it's up to him to stop the mayor before it's too late.

Kevin John Scott grew up in England and has lived in other peculiar places. His book is about one of them. Today he lives near Seattle with his hilarious wife, their whirlwind son, some trees, and an occasional bobcat. Visit him at www.kevinjohnscott.com.
About Kobo eBooks