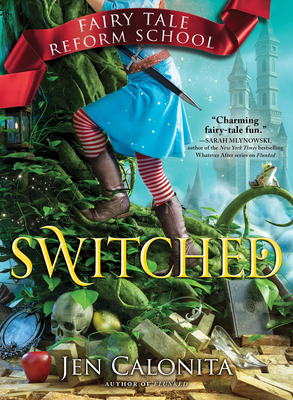 This is book number 4 in the Fairy Tale Reform School series.

Things at Fairy Tale Reform School are great. Rumpelstiltskin has been ousted, and everyone is buzzing about the fact that Beauty and Prince Sebastian (aka the Beast) have joined the teaching staff. Everyone, that is, except Gilly, who can't seem to focus on anything but Anna. How is it that her beloved sister somehow went bad and joined up with Rump? And why doesn't anyone seem to care? Sure, the Royal Court says they're working on it, but they've got exactly nothing to show for it.

But when new-kid Jack joins FTRS with tales of his own family being snatched by Rump, Gilly knows she's in good company. Jack wants answers, just like Gilly. And if the Royal Court can't get the job done, then maybe it's time to break some rules…

This series is perfect for read-alongs between parents and kids and engaging reluctant readers.

Jen Calonita has interviewed everyone from Reese Witherspoon to Justin Timberlake, but the only person she’s ever wanted to trade places with is Disney’s Cinderella. She’s the award-winning author of the Royal Academy Rebels and Fairy Tale Reform School series. Jen lives in Merrick, New York with her husband, two sons, and their two Chihuahuas, Captain Jack Sparrow and Ben Kenobi. Visit jencalonitaonline.com for more.