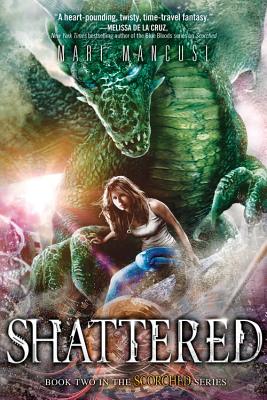 This is book number 2 in the Scorched series series.

A girl at the end of the world. Two brothers fighting for opposite sides.

And a dragon who can save them all…Or set the world on fire.

Trinity's world changed forever the day she stole Emmy's egg. Now she's on the run with the last living dragon and twin brothers from a war-torn future. Connor may have betrayed his mission to kill Emmy, but he'll still do whatever it takes to prevent the coming dragon apocalypse.

When a video of Emmy flying over the skies of West Texas goes viral, the government closes in—and the future they've risked everything for is about to go up in flames.

Don't miss the next firey, action-packed installment in Mari Mancusi's heart-pounding Scorched trilogy—and for more, be sure to pick up the epic conclusion Smoked in September.

"Tense and action-packed. It's a brave new world and I reveled in every page!"—Sophie Jordan, New York Times bestselling author of Firelight

Mari Mancusi is a two-time Emmy award-winning television producer and author of novels for adults and teens. A graduate of Boston University, she now lives in Austin, Texas with her husband and young daughter. When not writing or producing she enjoys traveling, snowboarding, reading fantasy novels, and her favorite guilty pleasure: video games.