Aleca Zamm Fools Them All (Paperback) 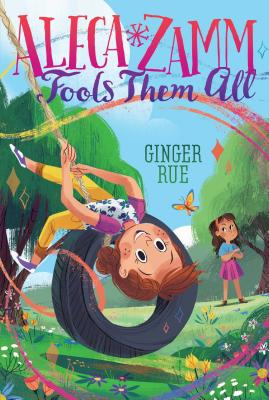 This is book number 3 in the Aleca Zamm series.

Aleca Zamm, an ordinary ten-year-old with an extraordinary talent, finds a new friend and has to rescue her Aunt Zephyr from a teleportation crisis in this hilarious third novel in the Aleca Zamm chapter book series.

Aleca Zamm knows she’s not the only Wonder at school with a magical ability. Third grader Ford Kimble is a Wonder as well. Ford is able to see people as they used to be in the past and as they will be in the future. He can time travel! Well, sort of!

Aleca starts hanging out with Ford to discuss their magical abilities, which makes Aleca’s best friend, Maria, jealous. Aleca even forgot the first meeting of the Secret Pals Club, Maria and Aleca’s new idea for a club that performs secret good deeds for bullied kids!

Ginger Rue is the author of the middle grade Tig Ripley and Aleca Zamm novels, as well as Brand-New Emily and Jump. She lives in Alabama.