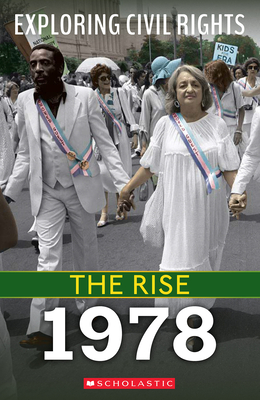 Learn about the key events of the civil rights movement in the latest installment of this exciting and informative series.

The year 1978 was one of steps toward equality in the civil rights movement. In February, Max Robinson successfully became the first African American broadcast network anchor for ABC news. In June, the Supreme Court case California v. Bakke ruled that affirmative action was legal in the United States and race could be included in the criteria for admissions into colleges and universities. In July, the National Organization of Women coordinated an impressive march of 100,000 demonstrators in Washington, DC, in support of the Equal Rights Amendment. And the world watched as African American boxer, Muhammad Ali, defeated Leon Spinks to win his third heavyweight title in September, becoming the first person to ever to win the title three times.

This detailed account explains why 1978 was such a critical year in the civil rights movement.

The years from 1967 to 1978 were critical to the civil rights movement. Resistance was often met with violence against Black Americans struggling to end discrimination and segregation. Yet the courage of those yearning for equal opportunities under the law continued to persevere and set the stage for even more progress in the coming decades. Discover how this specific time period brought about change and how it still affects us as a society today.

With stunning photographs throughout and rich back matter, each book focuses on a specific year and chronologically follows the detailed events that occurred and the changes that took place.

Nel Yomtov is an award-winning author of nonfiction books and graphic novels about American and world history, geography, sports, science, mythology, and military history. He has written numerous titles in Scholastic’s True Books, Enchantment of the World, Cornerstones of Freedom, and Calling All Innovators series. Nel lives in the New York City area with his wife, Nancy, an educator. His son, Jess, is a sports journalist and website producer.
About Kobo eBooks