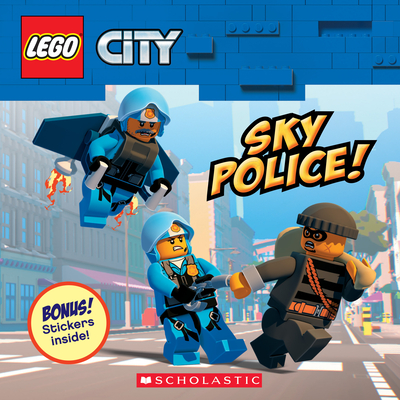 By Meredith Rusu
Email or call for price.
Hard to Find

An all-new LEGO(R) City adventure in the skies! Includes one sheet of stickers!
From the hit LEGO City TV series, meet the Sky Police -- Police Chief Wheeler's latest wacky idea! Patrolling from the airspace above LEGO City, these cops will make sure that no crime goes unsolved high above the city. But... just how much crime DOES happen in the sky? Sergeant Sam Grizzled and his excited partner Rook are in for a surprise if they think that their first ride as Sky Police will be anything less than bumpy! It's a hilarious, all-new adventure that comes with one sheet of stickers!

Meredith Rusu is the author of more than 50 children's books, specializing in titles based on television and movies such as LEGO Ninjago, Peppa Pig, and Star Wars. She is also the author of The DATA Set series under the name Ada Hopper. Meredith lives in New Jersey with her husband and two young sons who provide much of the inspiration for her writing. When she isn't working, Meredith enjoys karaoke, spending time with family, and going on the occasional adventure or two.