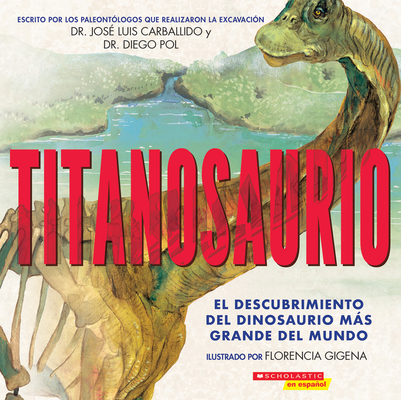 Scholastic and the American Museum of Natural History join forces in a thrilling new picture book about the discovery of the Titanosaur -- the biggest, heaviest creature to ever walk Earth! ¡Este libro cuenta la historia del descubrimiento de este nuevo dinosaurio en boca de los paleontólogos que lideraron la excavación! Desde su descubrimiento por un pastor del lugar hasta la culminación de la excavación, esta historia fascinante mantendrá en vilo a los lectores, y las preciosas ilustraciones los hipnotizarán.This book tells the story of the discovery of this new dinosaur from the mouths of the paleontologists who led the dig! From its discovery by a local herder, to the organization and completion of the excavation, this riveting story will have readers on the edge of their seats, and the beautifully painted illustrations will mesmerize.

Dr. Carballido acquired his PhD studying and analyzing the evolution and anatomy of sauropod dinosaurs. He obtained his doctoral degree in 2012, conducting his research at the MEF Museum in Patagonia, where he is still working. For the last 10 years he conducted and participated in several field trips in Patagonia, looking for new evidence on past life, especially in Cretaceous rocks. He is particularly interested in understanding the great diversity of these giant plant-eating dinosaurs that proliferated in Patagonia during the dinosaur era. He is currently studying some new species of sauropods from South America, as well as species from other places such as Germany and the United States.
Dr. Pol studies dinosaurs and other fossil reptiles and specializes in understanding their evolutionary relationships using phylogenetics. During the last 10 years, Pol and his research team have explored different regions of South America and discovered fossils of over 20 new species of dinosaurs, crocs, and other vertebrates. Pol has also worked closely with colleagues from the American Museum of Natural History and other institutions worldwide on field expeditions and scientific studies of fossils from South Africa, Madagascar, Colombia, Brazil, Mongolia, and China. He conducted his PhD at the joint program of Columbia University and the AMNH and received his degree in 2005. Since 2006 he has led the Vertebrate Paleontology program at the MEF Museum in Patagonia (Argentina), and he is a research associate of the AMNH Division of Paleontology.
Mother and wife, graphic designer, illustrator, philanthropist, and fan of museums, history, and humor, Florencia has created designs, images, and communication strategies in all areas, from the landing of the largest dinosaur in the world in New York to the launch of one of the latest European cars in Argentina. She graduated with a degree in Fine Arts and Design, and has been living in Patagonia for more than two decades. Head of the Communication Management at MEF and creative director of her own design studio, she divides her activities between multiple and different facets.
About Kobo eBooks