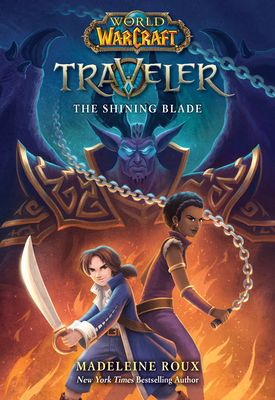 By Madeleine Roux
$7.99
Email or call for price.

Don't miss the epic conclusion to the World of Warcraft: Traveler trilogy, brought to life by New York Times bestselling author Madeleine Roux! Aramar Thorne and Makasa Flintwill have borne their fair share of troubles. Ever since Aram's father entrusted him with an enchanted compass, Aram and Makasa have traveled the extraordinary lands of Azeroth, seeking out the shards of a legendary weapon: the Diamond Blade. The truth behind the weapon, and the terrible doom it seeks to prevent, seems to have been lost at sea with Captain Greydon Thorne. But not all secrets are meant to stay buried.As the pair struggles to stay two steps ahead of Malus and the Hidden - dangerous mercenaries and sorcerers who'll stop at nothing to gain the compass - Aram and Makasa have assembled a powerful band of their own allies. From lively goblins and fantastic creatures to mighty druids and mysterious dryads, people are drawn to the talented young artist and the formidable fighter - a fortunate fact. For in their most desperate hour, Aram and Makasa will need all the help they can get to prevent Azeroth from being plunged into eternal darkness and chaos.This epic conclusion to the World of Warcraft: Traveler trilogy is penned by New York Times bestselling author Madeleine Roux and features stunning new artwork throughout.

Madeleine Roux is the New York Times bestselling author of the Asylum series, which has sold over a million copies worldwide, and whose first book was named a Teen Indie Next List Pick. She is also the author of the House of Furies series, Allison Hewitt Is Trapped, Sadie Walker Is Stranded, and the upcoming Salvaged. Her short story contributions can be found in collections such as Star Wars: From a Certain Point of View, RESIST, and New Scary Stories to Tell in the Dark. Madeleine is a 13-year World of Warcraft veteran, a noncombat pet enthusiast, and was briefly known as the Slayer of Incompetent, Stupid, and Disappointing Minions. She spends all her DKP on treats for her beloved corehound in Seattle, Washington.
About Kobo eBooks