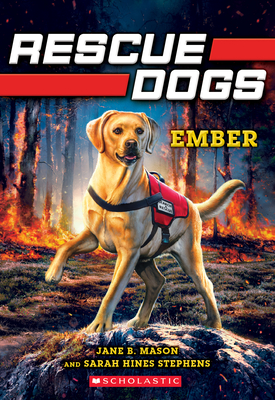 Action and adventure with high stakes and a happy ending -- and dogs!

After Ember is rescued from a devastating house fire, she longs for a forever home. But every family that adopts the yellow Lab puppy brings her back, saying she is untrainable, has too much energy, or is just plain destructive. After three failed placements, young Ember is out of options.

The Sterling family runs a ranch that turns rescued dogs into rescue dogs. They're willing to take a chance on the young Lab, not knowing that Ember's first rescue will test her skills and strength beyond imagination...

Jane B. Mason lives in Oakland, California, where she spends her time adjusting to her teenage children, open water swimming, and writing. Her most recent titles, written with Sarah Hines Stephens, include A Dog and His Girl Mysteries and the Candy Apple titles The Sister Switch and Snowfall Surprise. Without Annette was Jane's YA debut.

Sarah Hines Stephens lives in Oakland, California, where she spends her time keeping up with her children and writing books with Jane B. Mason, including A Dog and His Girl Mysteries and the Candy Apple titles The Sister Switch and Snowfall Surprise.

* "Jane shines at atmospheric descriptions of the opulence of the ship and the people themselves while also managing to bring her powers of keen observation to the third-class passengers, many of whom were immigrant families full of hope . . . A compelling novel that stands both on its own merit and as an addition to the wealth of Titanic literature." -- Kirkus Reviews, starred review

"Jane pulls off the unusual feat of being both suspenseful and informative, gracefully incorporating technical details about the boat into high-drama scenes." -- New York Times Book Review