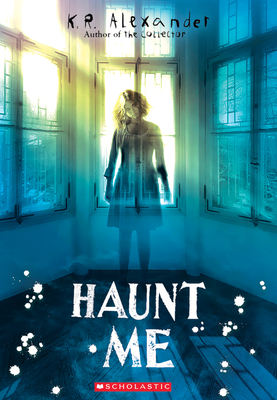 From horror master K. R. Alexander, the tale of a sleepover where a vengeful ghost is the uninvited guest who won't leave . . . or let anyone else leave.
Maria has never gotten over her sister Isabella's death . . . and the guilt she feels about what happened. It hangs over everything she does, even an innocent slumber party with her two best friends.

When one friend suggests they play a game that summons the spirits of the dead, Maria thinks it's all make-believe. But then she starts to hear from a spirit -- a spirit claiming to be her sister.

Maria doesn't want to think it's possible. . . but the sinister spirit has a way of making her listen.

Has her sister actually returned?

As K. R., he writes creepy middle grade books for brave young readers. As Alex -- his actual first name -- he writes fantasy novels for adults and teens. In both cases, he loves writing fiction drawn from true life experiences. (But this book can’t be real . . . can it?)

Alex has traveled the world collecting strange and fascinating tales, from the misty moors of Scotland to the humid jungles of Hawaii. He is always on the move, as he believes there is much more to life than what meets the eye.

You can learn more about his travels and other books, including The Collector, The Fear Zone, and the Scare Me series, on his website: cursedlibrary.com

He looks forward to scaring you again . . . soon.