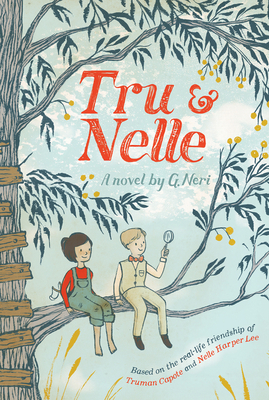 * "Charming and elegantly written." —Kirkus Reviews, starred review   Long before they became famous writers, Truman Capote (In Cold Blood) and Harper Lee (To Kill a Mockingbird) were childhood friends in Monroeville, Alabama. This fictionalized account of their time together opens at the beginning of the Great Depression, when they're both still young. They love playing pirates, but they like playing Sherlock and Watson–style detectives even more. It’s their pursuit of a case of drugstore theft that lands the daring duo in real trouble. Humor and heartache intermingle in this lively look at two budding writers in the 1930s South.

G. Neri has written many books for children, including Yummy: The Last Days of a Southside Shorty, a Coretta Scott King Author Honor winner, Knockout Games, Hello, My Name Is Johnny Cash, and Ghetto Cowboy. He lives in Florida with his wife and daughter.

* “In a bold but rewarding gambit, Neri imagines the childhood friendship of Harper Lee and Truman Capote, sprinkling in bits of To Kill a Mockingbird and foreshadowing such adult events as their collaborative work on In Cold Blood—yet still making it entirely Neri’s own…. The children’s symbiotic relationship holds center stage. Neri doesn’t shy away from their attributes: Nelle can be a bully and Tru is seen as a “sissy.” But their ability to play to each other’s strengths compensate for any real or perceived weaknesses as they rope others into their fantastic plans. As Neri puts it, ‘They made for a perfect pair of misfits. . . . And that was okay.’ Readers will find it more than okay.” —Booklist, STARRED review   * "The charming and elegantly written novel doesn't shy away from issues of mental illness, abandoned children, and racism, but they are woven neatly into the fabric of the characters' lives in the tiny Southern town. An engaging portrait of two children's world before they became famous." —Kirkus, STARRED review   "[Tru & Nelle] reads like a classic. Although the middle-grade readers the book is intended for may not be familiar with the work of Capote and Lee, they will be touched by their resilience in the face of dark family and societal situations." —San Francisco Book Review "... this fictional account of the childhood bond between Harper Lee and Truman Capote will entertain readers on its own merits, but it also serves as a love letter to two cultural icons..." —Horn Book Magazine   "This story is heartwarming, funny, and beautifully crafted; readers will be sucked in from the very first chapter. " —School Library Journal   "If you've ever wanted to run through the backyards of dusty old Maycomb, Alabama, in search of high adventure and mystery, just like Scout, Dill, and Jem, then this is your chance. It's all here! Greg Neri has recreated the childhoods of Harper Lee, Truman Capote, and Jennings Carter— the real-life models for the kids in To Kill a Mockingbird— and spun new adventures for them. You'll join these three friends as they really lived, and help them figure out a case that has the whole town baffled. I hope you're up for some fun!"— Charles J. Shields, author of Mockingbird: A Portrait of Harper Lee   "Tru & Nelle is a wonderfully imaginative re-creation of the childhoods of two great American writers, but even more, it is a novel that affirms the mysterious and glorious ways that friendship reaches across boundaries of all sorts to claim unexpected kinship."--Gary D. Schmidt, author of Newbery Honor books Lizzie Bright and the Buckminster Boy and The Wednesday Wars     “Tru & Nelle is G. Neri’s gloriously realized return to the world of To Kill a Mockingbird. This fictional take on the childhood friendship of Harper Lee and Truman Capote is both funny and deeply poignant—an utterly charming mystery-adventure that is part Huck Finn, part Anne of Green Gables and part Scooby Doo. It just might become a timeless classic itself.” - Margaret Stohl, #1 New York Times and International bestselling co-author of the BEAUTIFUL CREATURES novels —