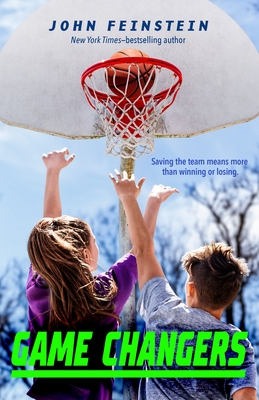 This is book number 2 in the The Benchwarmers Series series.

Trouble is about to tip off for Jeff and Andi’s sixth-grade basketball teams in Game Changers, a standalone second book in the middle-grade Benchwarmers series by #1 New York Times bestselling sportswriter John Feinstein.

After a controversial season playing on the boys' soccer team, Andi Carillo is ready to kick butt and take names on the girls' basketball team. Jeff Michaels, her best friend, is raring to drop his benchwarmer status from soccer and play a leading role on the boys' basketball squad. But between a coach's coded racism and a teammate's endless sabotage, neither Andi nor Jeff is in for a layup of a season. To make matters worse, the local media smells more than one juicy story. Will Andi and Jeff be able to power through and find a way to help both their teams rebound?

From sportswriting legend John Feinstein comes this fast-paced novel about two friends who are willing to risk it all to change the game—on and off the court.

"Feinstein’s game descriptions are tight and exciting . . At the end the drama moves from basketball court to food court . . . and even to the courtroom . . . Both young jocks show that when the pressure is on, they’ve got game in life as well as hoops." --Kirkus Reviews
About Kobo eBooks