The Tornado: A Novel (Paperback) 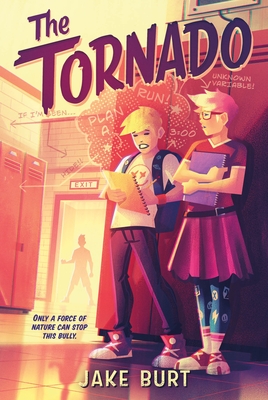 Jake Burt's The Tornado is "One of the best stories about bullying for middle grades. Highly recommended." —School Library Journal, starred review

Bell Kirby is an expert at systems, whether he’s designing the world’s most elaborate habitat for his pet chinchilla, re-creating Leonardo da Vinci’s greatest inventions in his garage, or avoiding Parker Hellickson, the most diabolical bully Village Green Elementary has ever seen.

Since third grade, Parker has tormented Bell, who’s spent two long years devising a finely tuned system that keeps him out of Parker’s way. Sure, it means that Bell can’t get a drink when he wants to, can’t play with his best friend on the playground, and can’t tell his parents about his day, but at least he’s safe.

Until Daelynn Gower touches down in his classroom like a tornado.

Bell’s not sure why the new girl, with her rainbow hair, wild clothes, and strange habits, is drawn to him, but he knows one thing--she means trouble. It’s bad enough that she disrupts Bell’s secret system, but when Daelynn becomes the bully’s new target, Bell is forced to make an impossible decision: Finally stand up to Parker. . .

Jake Burt is the author of the middle-grade novels Greetings from Witness Protection!, an Indie Next selection, The Right Hook of Devin Velma, a Junior Library Guild selection, and The Tornado, which School Library Journal called "one of the best stories about bullying for middle grades,” in a starred review. His novel Cleo Porter and the Body Electric was praised as a "thrilling sci-fi adventure" by #1 New York Times bestselling author Alan Gratz. Jake Burt teaches fifth grade, and lives in Hamden, CT, with his wife and their daughter.

"Having been mercilessly bullied for three years by Parker... fifth- grader Bell is at first so relieved when his tormentor switches focus to flamboyantly dressed new girl Daelynn that he actually goes along with a mean prank on her. So sharp is his guilt, though—particularly after Daelynn justly berates him for being a coward—that after a few false starts he screws his courage to the sticking place and discovers that forming a mutual support group with her and other victims effectively keeps the bully at bay. But this is only partly about coping with a bully, and the rest of the story may well prove more engaging to young readers." —Booklist, starred review

"Gracefully folded into [The Tornado] are themes of friendship, accountability, engineering, and cooperation, and even a discussion on what life was like for Leonardo da Vinci. Even with a wide range of topics, Burt keeps the plot lively and focused as the very believable kids work to solve their own problems through both empathy and logic. ...A satisfying tale of bullying redemption with a STEM twist." —Kirkus Reviews


Praise for The Right Hook of Devin Velma:

"Spot-on sixth-grade humor and sympathetic characters will hook readers as he explores fame and friendship in the age of social media." —Publishers Weekly

"Fisticuffs ensue, but so in time do good and brave words in this goofy, affectionate tale of loyalty, family and fraternity." —Wall Street Journal

"Features a fantastic male friendship and a well-developed roster of characters. ...This is a novel fully rooted in the experiences of today’s tweens, certain that they’re one social media stunt away from fame but also still struggling with timeless concerns, whether it’s managing the expectations of adults or crushing on their BFF’s older sister. Hand to fans of basketball and friendship stories." —Booklist

"He may not be the best candidate for the job, but twelve-year-old narrator and introvert Addison is willing to step in as cameraman/sidekick/lookout for his friend Devin, who plans to pull off an epic stunt, record and post it, go viral, and monetize his millions of views to cover his ailing father’s medical bills. ... fast-moving... just the ticket for easy entertainment or middle-grade book reports." —The Bulletin

"Jake Burt is a storytelling magician. Part coming of age tale and part spy thriller, Greetings from Witness Protection could be a collaboration between Judy Blume and Ian Fleming. Nicki relates her unusual experiences with humor and with a commitment that melted my heart and made me wish I’d known her when I was in seventh grade." —Ann M. Martin, New York Times-bestselling author of Rain Reign and the Baby-Sitters Club series

"This inventive, clever story has a lot of heart at its center. Jake Burt’s debut is utterly rewarding.” —Wendy Mass, New York Times-bestselling author of The Candymakers and Jeremy Fink and the Meaning of Life

"What do you get when you mix a snarky city girl with a shady past and lightning reflexes with a seemingly typical suburban family she's just met? A funny, action-packed novel about the trials of school, parental arguments, and sibling rivalry—all with a dash of high-stakes thrills and dramatic showdowns... [Readers] will relish the action and fast-paced plot as well as the engaging and competent Nicki, whose emotional strength and quick wits carry her through much of the narrative." —School Library Journal