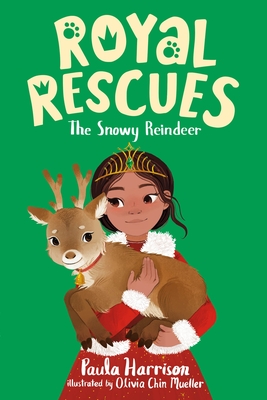 In Royal Rescues #3: The Snowy Reindeer—the third book in Paula Harrison's sweet new chapter book series, illustrated by Olivia Chin Mueller—a pet-loving princess finds and helps animals in trouble—even if it's against the rules of being royal!

“A royal palace is no place for pets, Beatrice!” says her father, King George.

But Princess Bea loves animals and is not going to let a royal rule stop her from helping every animal she finds.

When Bea goes to visit her cousins at the wintery Peruva Castle, she finds a cold and hungry reindeer hiding in the snow. But with the whole castle abuzz with party preparations, will Bea be able to keep the little deer safe until she can find its family? Find out in Royal Rescues #3: The Snowy Reindeer.

"A strong addition to a series that triumphs in showing positivity, emphasizing animal care, and encouraging helping those in need." —School Library Journal on The Snowy Reindeer

"Young readers who enjoy royalty or animal-based series, such as Daisy Meadows’s “Rainbow Magic” or Harrison’s other series, will devour this newest princess-and-pet offering. Frequent illustrations dot the chapters, and text is large and manageable for early ­chapter readers." —School Library Journal on The Naughty Kitten