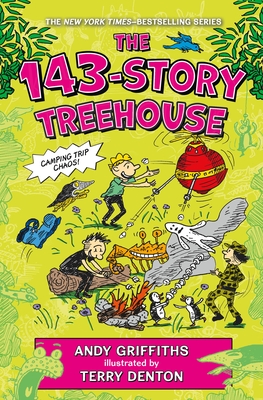 This is book number 11 in the The Treehouse Books series.

Andy and Terry live in a 143-story treehouse. (It used to be a 130-story treehouse, but they built another 13 stories.) It has a baked bean geyser that erupts on the hour every hour, a wrecking ball, a fish milkshake shack, a word-o-matic (it knows every word in the whole world!), a toffee apple orchard guarded by a kind-hearted scarecrow, and a camping ground.

Andy's been a bit stressed out lately, so Terry decides the perfect way to relax would be to head up to their new camping ground level for a much-needed vacation. But it turns out to be not quite as relaxing as planned. Terry forgets to pack the tent and the food, their attempt at fishing ends in disaster, the spooky campfire stories are a little too spooky and then, to make matters worse, all of Andy’s fellow campers start mysteriously disappearing. Can Andy brave the dark, dark woods and rescue them in time to finish writing their next book?