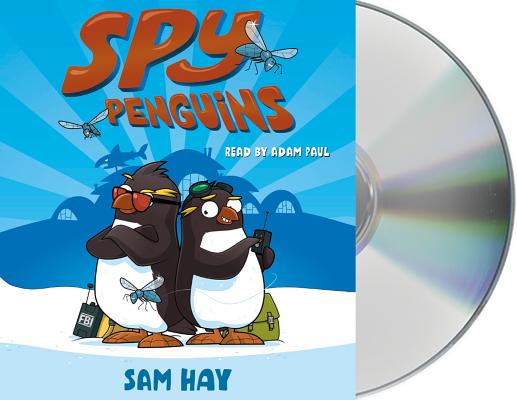 But when one of Q’s inventions goes dangerously wrong, Jackson suddenly finds himself dropped right in the middle of an FBI stakeout. There’s fishy business afoot at the city’s aquarium; rare fish are vanishing and not even the FBI can work out what’s going on. It’s up to Jackson and Quigley to solve the crime!

Sam Hay is the author of more than forty books for children including Spy Penguins, the Undead Pets series, and the Stella and the Night Sprites series. Raised in Scotland and trained as a journalist in Edinburgh, Sam became a full-time writer when her first baby was born and now lives in Wales with her husband and two children.

Sam Hay is the author of over thirty books for children including the Undead Pets series and Stella and the Night Spirits. Sam trained as a journalist in Edinburgh. After starting out in newspapers, Sam moved to London where she worked for BBC television for ten years. She still believes working on daily live television is the perfect brain-trainer for life! Sam became a full-time writer when her first baby was born and now lives in Wales with her husband and two children who provide the inspiration for many of her stories.

"Penguin details (“Quigley puffed up his feathers”) and humor (“There was one tiny, krill-sized problem with this plan”) by Hay (the Undead Pets series) build the world alongside cartoon illustrations by Jagucki. A quick pace, an engaging mystery, and attempted inventions—a pair of invisibility suits made of sardines that uses “the same scientific principles” as the fish—will keep readers hooked on this series opener." —Publishers Weekly
About Kobo eBooks