Rome, the Greek World, and the East, Volume 1: The Roman Republic and the Augustan Revolution (Studies in the History of Greece and Rome) (Paperback) 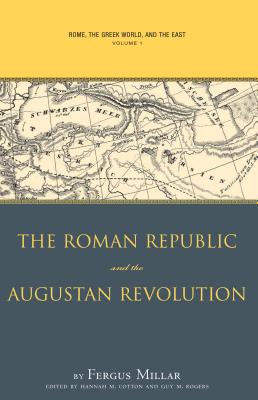 Fergus Millar is one of the most influential contemporary historians of the ancient world. His essays and books, including The Emperor in the Roman World and The Roman Near East, have enriched our understanding of the Greco-Roman world in fundamental ways. In his writings Millar has made the inhabitants of the Roman Empire central to our conception of how the empire functioned. He also has shown how and why Rabbinic Judaism, Christianity, and Islam evolved from within the wider cultural context of the Greco-Roman world.

Opening this collection of sixteen essays is a new contribution by Millar in which he defends the continuing significance of the study of Classics and argues for expanding the definition of what constitutes that field. In this volume he also questions the dominant scholarly interpretation of politics in the Roman Republic, arguing that the Roman people, not the Senate, were the sovereign power in Republican Rome. In so doing he sheds new light on the establishment of a new regime by the first Roman emperor, Caesar Augustus.
About Kobo eBooks