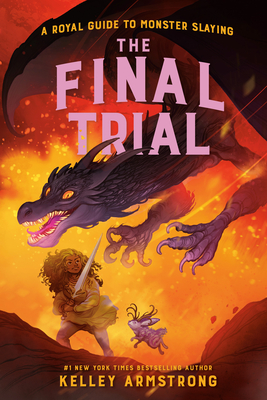 By Kelley Armstrong
$16.99
Unavailable
Not Yet Published

This is book number 4 in the A Royal Guide to Monster Slaying series.

Rowan embarks on an expedition to prove once and for all that she is the rightful royal monster hunter, in the fourth and final book in this fantastical series by New York Times–bestselling author, Kelley Armstrong.

The time has come! After discovering the true reason for the monster migration, Rowan is on an expedition to ultimately prove that she is worthy of the ebony monster-slaying sword on her back. She and her twin brother, Rhydd, their friends Dain and Alianor, as well as some other trusted advisors — and the ever-growing group of monstrous companions — are on a mission to help protect the dragon living in their homeland and are travelling to kingdoms beyond to make their case. But not everyone agrees that people can live peacefully alongside monsters, especially when new terrifying creatures appear. It will take everything Rowan has to fight off threats of all kinds, from both monsters and people. It won’t be easy, but if she succeeds, she will become Royal Monster Hunter at long last.

KELLEY ARMSTRONG is the #1 New York Times–bestselling author of three trilogies for teens: the Darkest Powers; Darkness Rising and Age of Legends, as well as several thriller and fantasy series for adults and three YA thrillers (The Masked Truth, Missing and Aftermath). She is also the author of the award-winning A Royal Guide to Monster Slaying, the first in a four-book series of the same name, which received two starred reviews from School Library Journal and Shelf Awareness. She lives in Aylmer, Ontario, Canada, with her family.


XAVIÈRE DAUMARIE is a French artist who has created designs and illustrations for several book series by Kelley Armstrong: Women of the Otherworld, including two graphic novels, Becoming and Bounty Hunt; Age of Legends; Cainsville; and The Blackwell Pages series by K.L. Armstrong and M.A. Marr. She lives in France.
About Kobo eBooks