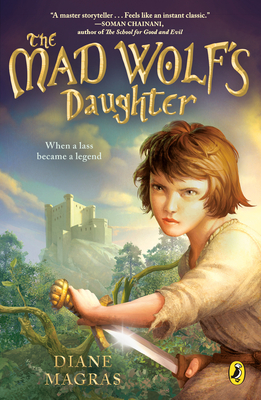 “This swashbuckling tale of rescue, irregular chivalry, and self-discovery is set in an authentic medieval Scotland. Drest, the Mad Wolf's daughter and the youngest member of her father's war band, sets out to save her captured family from the dungeons of Faintree Castle. With tension that accompanies both the narrative and character development, this is a tale that rewards the reader's journey many times over. Mad Wolf's Daughter is a middle grade adventure that we will be recommending both as a read-aloud and as a great gift for readers of many ages and dispositions.”
— Kenny Brechner, Devaney, Doak & Garrett Booksellers, Inc., Farmington, ME

A Scottish medieval adventure about the youngest in a war-band who must free her family from a castle prison after knights attack her home--with all the excitement of Ranger's Apprentice and perfect for fans of heroines like Alanna from The Song of the Lioness series.

One dark night, Drest's sheltered life on a remote Scottish headland is shattered when invading knights capture her family, but leave Drest behind. Her father, the Mad Wolf of the North, and her beloved brothers are a fearsome war-band, but now Drest is the only one who can save them. So she starts off on a wild rescue attempt, taking a wounded invader along as a hostage.

Hunted by a bandit with a dark link to her family's past, aided by a witch whom she rescues from the stake, Drest travels through unwelcoming villages, desolate forests, and haunted towns. Every time she faces a challenge, her five brothers speak to her in her mind about courage and her role in the war-band. But on her journey, Drest learns that the war-band is legendary for terrorizing the land. If she frees them, they'll not hesitate to hurt the gentle knight who's become her friend.

Drest thought that all she wanted was her family back; now she has to wonder what their freedom would really mean. Is she her father's daughter or is it time to become her own legend?

Diane Magras grew up on Mount Desert Island in Maine. The Mad Wolf's Daughter is her debut novel. She is the editor, writer, and chief fund raiser for the Maine Humanities Council. She volunteers at her son's school library, and is addicted to tea, toast, castles, legends, and most things medieval. Diane lives in Maine with her husband and son and thinks often of Scotland, where her books are set.

"Empathetic, bold, and entirely herself at a time when women were dismissed as weak, Drest shines in this fast-paced adventure."—Publishers Weekly (starred review)

"Drest is a wonderfully fierce and feisty heroine, able and quick of wit, and she is joined by other sympathetic and complex characters. . . . The plot is packed with twists and turns, and the ending leaves enough to suggest a sequel."—Booklist

"A gripping adventure with a marvelous heroine—I can't wait to read more!"— Catherine Gilbert Murdock, Newbery-honor author of The Book of Boy

"Action-packed at every turn."—Kirkus Reviews

"I loved it. A heart-warming and heart-pounding adventure, chockablock with mysteries and deceptions, dangers and disasters. Ultimately a tale of friendship, loyalty, and the illusive nature of truth, The Mad Wolf's Daughter will carry you away."—Karen Cushman, Newbery Medalist

Mad Wolf's Daughter pulled me in, and I felt delighted and taken care of. Go, Drest!"—Kristin Cashore, New York Times bestselling author of the Graceling Realm books and Jane, Unlimited

"Drest is a likable and headstrong character, and the composite of various regions in Scotland will appeal to tweens who appreciate atmospheric woodsy settings. Readers will learn, along with Drest, about feudal village life, contemporaneous attitudes toward gender, and the relationship between truth and legend. . . . Drest's embrace of unlikely friendships and a new code of honor are well done. A solid quest story for tweens with an interest in the Picts and medieval Scotland."—School Library Journal


"A great story elevates all its constituent parts. Sure, it's true that The Mad Wolf's Daughter is a middle grade fantasy with feminist elements, a strong young heroine, an informed exploration of relevant social issues, and the transposition of established gender roles, but it is the book's great storytelling that makes all its components shine. This swashbuckling tale of rescue, irregular chivalry, and self-discovery is richly set in an authentic medieval Scotland. . . . The well-balanced complexities of the story, along with the building drama and tension, make for a truly stirring climactic scene, which both ties up this first volume neatly but leaves the reader eager for book two. This is a middle grade fantasy which every children's bookseller should be on a quest to liberate from store shelves and afford it escape into customers' hands."—Kenny Brechner, Devaney Doak & Garrett Booksellers
About Kobo eBooks