Salt in His Shoes: Michael Jordan in Pursuit of a Dream (Paperback) 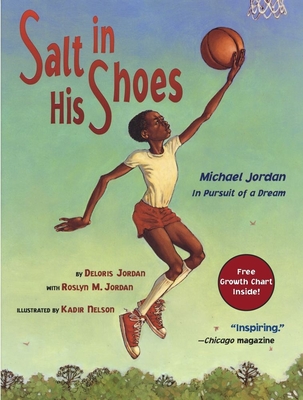 Michael Jordan’s mother and sister team up for this heartwarming and inspirational picture book about faith and hope and how any family working together can help a child make his or her dreams come true.

The mere mention of the name conjures up visions of basketball played at its absolute best. But as a child, Michael almost gave up on his hoop dreams, all because he feared he’d never grow tall enough to play the game that would one day make him famous.

That’s when his mother and father stepped in and shared the invaluable lesson of what really goes into the making of a champion—patience, determination, and hard work.

Deloris Jordan is Michael Jordan’s mother and the coauthor of Salt in His Shoes and Michael’s Golden Rules, illustrated by Kadir Nelson; Did I Tell You I Love You Today?, illustrated by Shane W. Evans; and Dream Big, illustrated by Barry Root. She is also the author of Family First: Winning the Parenting Game, a book highlighting the seven principles of parenting. Through her work with the James R. Jordan Foundation in Chicago, Illinois, as well as the Jordan Institute for Families at the University of North Carolina at Chapel Hill, Mrs. Jordan is widely regarded as an advocate for children and families. The mother of five children and the grandmother of eleven, Mrs. Jordan lives in Chicago.

Roslyn M. Jordan is Michael Jordan’s sister and the coauthor, with Deloris Jordan, of Salt in His Shoes and Did I Tell You I Love You Today?. She lives in Chicago.

Kadir Nelson is an award-winning American artist whose works have been exhibited in major national and international publications, institutions, art galleries, and museums. Nelson’s work has won the Coretta Scott King Award, the Robert F. Sibert Award, two Coretta Scott King Illustrator Honor Awards, and the 2005 Society of Illustrators Gold Medal. His beloved, award-winning, and bestselling picture books include We Are the Ship: The Story of Negro League Baseball; Thunder Rose, written by Jerdine Nolen; Ellington Was Not a Street, written by Ntozake Shange; Salt in His Shoes, written by Deloris Jordan and Roslyn M. Jordan; and many more. Kadir lives in Los Angeles.

The Bulletin of the Center for Children's Books A picture-book winner.

Miami Herald The power of myth-in-the-making.
About Kobo eBooks