The Last Kids on Earth and the Zombie Parade (Hardcover) 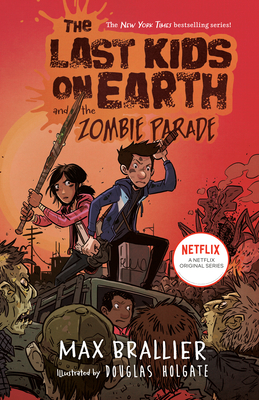 This is book number 2 in the The Last Kids on Earth series.

The second book in the New York Times, USA Today, and Wall Street Journal bestselling series, with over 7 million copies in print!

The zombies are disappearing. This might seem like a good thing, since zombies eat your brains, but normal human kid Jack Sullivan is suspicious. He keeps hearing an eerie shrieking noise that seems to be almost summoning the zombies—but to where, and for what (probably) foul purpose?

Jack, his three best friends (maybe the only people left on Earth), and their pet monster Rover need to get to the bottom of this. Along the way they encounter a lot more than they bargained for, including a giant Wormungulous, a pizza parlor monster hangout, an ancient evil who destroys worlds, and a stereo system that is totally the bomb. Can Jack figure out why the zombies are vanishing . . . before he and his friends are next?

Told in a mixture of text and black-and-white illustration, this is the perfect series for any kid who's ever dreamed of starring in their own comic book or video game.

Max Brallier is a New York Times, USA Today, and Wall Street Journal bestselling author. His books and series include The Last Kids on Earth, Eerie Elementary, Mister Shivers, Galactic Hot Dogs, and Can YOU Survive the Zombie Apocalypse? He is a writer and producer for Netflix’s Emmy-award-winning adaptation of The Last Kids on Earth. Max lives in Los Angeles with his wife and daughter. Visit him at MaxBrallier.com.

"This series is a must-have for middle grade collections."--School Library Journal

"Jack's witty narration and Holgate's pitch-perfect illustrations make for a terrific read that's particularly well suited for middle-grade boys who might otherwise be reluctant to pick up a book. . . . An apocalyptic adventure with a whole lot of heart."--Kirkus Reviews


Acclaim for The Last Kids on Earth:

* "Middle-grade readers, particularly boys, will find Jack’s pitch-perfect mix of humor, bravado, and self-professed geekiness impossible to resist. . . . The marriage of text and illustration serves as a perfect example of what an illustrated novel can and should be."--Kirkus Reviews, starred review