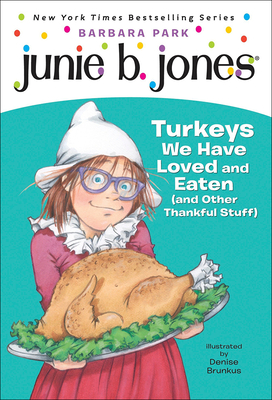 By Barbara Park, Denise Brunkus
$16.25
Email or call for price.

Gobble Gobble Celebrate Thanksgiving with Junie B. Jones
Meet the World's Funniest First Grader--Junie B. Jones
It's Thanksgiving time and Room One is getting ready for their very own Thanksgiving feast There's even a contest to see which room can write the best thankful list. The winners will get a pumpkin pie Only it turns out being thankful is harder than it looks. Because Junie B. is not actually thankful for Tattletale May. Or squash. Or scratchy pilgrim costumes. And pumpkin pie makes her vomit, anyway. (But Junie B. is thankful for yummy cranberry sauce that's shaped like a can. And biscuits that explode from their can. And nipsy doodles ) Will Room One win the disgusting pie? Can May and Junie B. find common ground? Or will this Thanksgiving feast turn into a Turkey Day Disaster? Includes an EXCLUSIVE Junie B. Jones Turkey Day photo frame
With over 50 million books in print, the "New York Times" bestselling Junie B. Jones is a classroom favorite and has been keeping kids laughing--and reading--for over 20 years
"USA TODAY"
"Junie B. is the darling of the young-reader set."
"Publisher's Weekly"
"Park convinces beginning readers that Junie B.--and reading--are lots of fun."
"Kirkus Reviews"
"Junie's swarms of young fans will continue to delight in her unique take on the world....A hilarious, first-rate read-aloud."
"Time Magazine"
"Junie B. Jones is a feisty six-year-old with an endearing penchant for honesty.

BARBARA PARK is best known as the author of the wildly popular "New York Times" bestselling Junie B. Jones series, which has kept kids (and their grown-ups) laughing--and reading--for over two decades. Beloved by millions, the Junie B. Jones books have been translated into multiple languages and are a time-honored staple in elementary school classrooms around the world. Barbara once said, "I've never been sure whether Junie B.'s fans love her in spite of her imperfections...or because of them. But either way, she's gone out into the world and made more friends than I ever dreamed possible."

Barbara Park is also the author of award-winning middle grade novels and bestselling picture books, including "Skinnybones, Mick Harte Was Here, " and "Ma! There's Nothing to Do Here!

Barbara Park was born in New Jersey in 1947 and spent most of her adult life in Arizona, where she and her husband, Richard, raised two sons. Barbara died in 2013, but her legacy lives on in the laughter her books give to readers all over the world.

DENISE BRUNKUS' entertaining illustrations have appeared in over fifty books, including each Junie B. title. She lives in Massachussetts with her husband and daughter
About Kobo eBooks