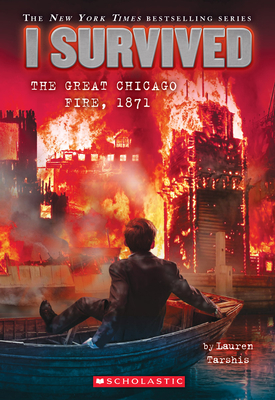 This is book number 11 in the I Survived series.

Could an entire city really burn to the ground?
Oscar Starling never wanted to come to Chicago. But then Oscar finds himself not just in the heart of the big city, but in the middle of a terrible fire! No one knows exactly how it began, but one thing is clear: Chicago is like a giant powder keg about to explode.

An army of firemen is trying to help, but this fire is a ferocious beast that wants to devour everything in its path, including Oscar! Will Oscar survive one of the most famous and devastating fires in history?

Lauren Tarshis brings history's most exciting and terrifying events to life in this New York Times-bestselling series. Readers will be transported by stories of amazing kids and how they survived!

Lauren Tarshis's New York Times bestselling I Survived series tells stories of young people and their resilience and strength in the midst of unimaginable disasters and times of turmoil. Lauren has brought her signature warmth and exhaustive research to topics such as the battle of D-Day, the American Revolution, Hurricane Katrina, the bombing of Pearl Harbor, and other world events. She lives in Connecticut with her family, and can be found online at laurentarshis.com.

Praise for I SURVIVED THE BATTLE OF GETTYSBURG, 1863

Praise for I SURVIVED THE SINKING OF THE TITANIC, 1912:

Praise for I SURVIVED HURRICANE KATRINA, 2005:

"Expressive illustrations capture the drama of the storm and its aftermath, but the book's real power comes from its exploration of what it means to be a hero." --BOOKLIST