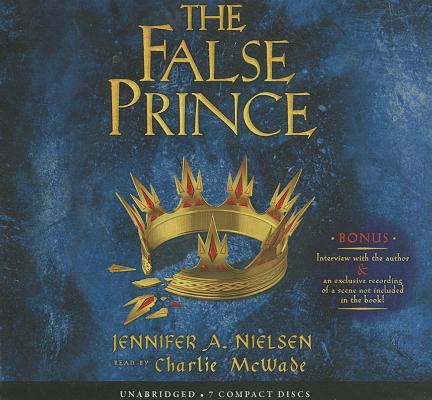 This is book number 1 in the The Ascendance Series series.

“Led by the intimidating but brilliant Connor, four orphans are forced to compete for the essential role in a treasonous plot -- that of impersonating the long-disappeared Prince Jaron of Carthya. Set in the Middle Ages, this tale invites readers to follow 15-year-old Sage, a defiant and witty orphan, through a twisted, dangerous, and all-consuming journey that, if unsuccessful, will result in his death. Full of suspense and dark humor, The False Prince is a compelling read. I look forward to Book Two”
— Stephenie McCollum, Copperfield's Books, Santa Rosa, CA

THE FALSE PRINCE is the thrilling first audiobook in a brand-new trilogy filled with danger, deceit, and hidden identities that will keep listeners hanging on to the edge of their seats.NARRATOR: Charlie McWadeFORMAT: 7 CDs, UnabridgedIn a discontent kingdom, civil war is brewing. To unify the divided people, Conner, a nobleman of the court, devises a cunning plan to find an impersonator of the king's long-lost son and install him as a puppet prince. Three orphans are recruited to compete for the role, including a defiant boy named Sage. Sage knows that Conner's motives are more than questionable, yet his life balances on a sword's point -- he must be chosen to play the prince or he will certainly be killed. But Sage's rivals have their own agendas as well.