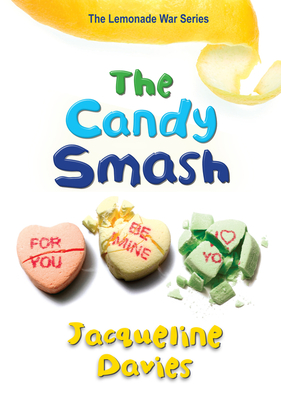 By Jacqueline Davies
$16.99
Email or call for price.

This is book number 4 in the The Lemonade War Series series.

The fourth installment of the popular Lemonade War series! Siblings Jessie and Evan Treski have waged a lemonade war, sought justice in a class trial, and even unmasked a bell thief. Now they are at opposite ends over the right to keep secrets...

Evan believes some things (such as his poetry) are private. Jessie believes scandal makes good news.

When anonymously sent candy hearts appear in Class 4-0, self-appointed ace reporter Jessie determines to get the scoop on class crushes.

Like a modern-day Beverly Cleary, Jacqueline Davies writes with heart, humor, and honesty about family and school life for middle schoolers.

"Another rewarding chapter book from the Lemonade War series." — Booklist

"A terrific tie-in to Valentine's Day, but a good anytime school story for boys and girls alike." —Read Kiddo Read —