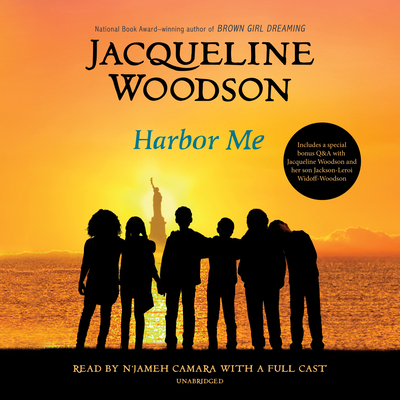 “Six students with diverse backgrounds end up together in a special-needs 5th/6th grade class in Brooklyn. Their perceptive teacher gives them one hour every Friday afternoon to simply talk with each other unsupervised. The results are deep conversations about their individual experiences and a bond formed from mutual respect and empathy. Through her compelling and big-hearted characters, Woodson makes the conversations around immigration, incarceration, police brutality, and class divide age-appropriate and approachable for young people.”
— Naomi Chamblin, Napa Bookmine, Napa, CA

It all starts when six kids have to meet for a weekly chat--by themselves, with no adults to listen in. There, in the room they soon dub the ARTT Room (short for "A Room to Talk"), they discover it's safe to talk about what's bothering them--everything from Esteban's father's deportation and Haley's father's incarceration to Amari's fears of racial profiling and Ashton's adjustment to his changing family fortunes. When the six are together, they can express the feelings and fears they have to hide from the rest of the world. And together, they can grow braver and more ready for the rest of their lives.

Jacqueline Woodson (www.jacquelinewoodson.com) is the recipient of the 2020 Hans Christian Andersen Award, the 2018 Astrid Lindgren Memorial Award, and the 2018 Children’s Literature Legacy Award. She was the 2018–2019 National Ambassador for Young People’s Literature, and in 2015, she was named the Young People’s Poet Laureate by the Poetry Foundation. She received the 2014 National Book Award for her New York Times bestselling memoir Brown Girl Dreaming, which was also a recipient of the Coretta Scott King Award, a Newbery Honor, the NAACP Image Award, and a Sibert Honor. She wrote the adult books Red at the Bone, a New York Times bestseller, and Another Brooklyn, a 2016 National Book Award finalist. Born in Columbus, Ohio, Jacqueline grew up in Greenville, South Carolina, and Brooklyn, New York, and graduated from college with a B.A. in English. She is the author of dozens of award-winning books for young adults, middle graders, and children; among her many accolades, she is a four-time Newbery Honor winner, a four-time National Book Award finalist, and a two-time Coretta Scott King Award winner. Her books include New York Times bestsellers The Day You Begin and Harbor Me; The Other Side, Each Kindness, Caldecott Honor book Coming On Home Soon; Newbery Honor winners Feathers, Show Way, and After Tupac and D Foster; and Miracle's Boys, which received the LA Times Book Prize and the Coretta Scott King Award. Jacqueline is also a recipient of the Margaret A. Edwards Award for lifetime achievement for her contributions to young adult literature and a two-time winner of the Jane Addams Children's Book Award. She lives with her family in Brooklyn, New York.

* “Woodson celebrates all that is essential and good for humanity—compassion, understanding, security, and freedom—in this touching novel. . . . Woodson’s skills as poet and master storyteller shine brightly here as she economically uses language to express emotion and delve into the hearts of her characters. Showing how America’s political and social issues affect children on a daily basis, this novel will leave an indelible mark on readers’ minds.”—Publishers Weekly, starred review

* “Woodson delivers a powerful tale of community and mutual growth. The bond they develop is palpable. . . . The characters ring true as they discuss issues both personal and global. This story, told with exquisite language and clarity of narrative, is both heartbreaking and hopeful. An extraordinary and timely piece of writing.”—Kirkus Reviews, starred review

* “The magic is in the writing. Woodson tells stories torn from headlines but personalizes them with poetry and memories, blunting their trauma with understanding and love. Haley’s history weaves in and out, drawing readers close. These children become each other's safe harbors and Woodson brilliantly shows readers how to find the connections we all need.”—Booklist, starred review

* “Woodson’s spare, lyrical, and evocative prose carries the story seamlessly, weaving in themes of justice and family, friendship and courage. This is a timely and beautifully written story that should be on library shelves everywhere.”—School Library Journal, starred review

* "In her first middle-grade novel since her 2014 National Book Award winner, Brown Girl Dreaming, National Ambassador for Young People's Literature Jacqueline Woodson deftly alchemizes a sixth-grade classroom into an affecting metaphor for racial, political and socioeconomic challenges—enhanced by the transformative power of storytelling: ‘what matter[ed] most is that we were heard.’ . . . A powerful love letter to effective teachers, unexpected friendship and the healing magic of hearing, recording and sharing words.”—Shelf Awareness, starred review

“Explore[s] deep issues of identity, community, family, change, and forgiveness. The power of remembrance is also an important theme. . . . Will speak to young people’s insecurities and fears while recognizing their courage in facing them, and [Woodson's] craft as a weaver of words and imagery is evident on every page. A timely tribute to the resilience of young people and to the power of human connection that often overrides our differences.”—Horn Book

“Takes readers on a journey during which young urban teenagers discover the satisfaction of a well-wrought conversation. Woodson's easygoing lyrical voice is the highlight. . . . Each likable young person tells an engaging story, and the others are quick to listen. . . . Many urban readers will hear their story in one of these six's narratives. . . . With alternatingly simple, realistic language and flashes of lyrical romanticism . . . will please teachers trying to coax personal revelations from their students.”—Voice of Youth Advocates

"Leaves readers of all ages asking, 'would I let myself be a harbor for someone who needs it?'”—School Library Connection
About Kobo eBooks