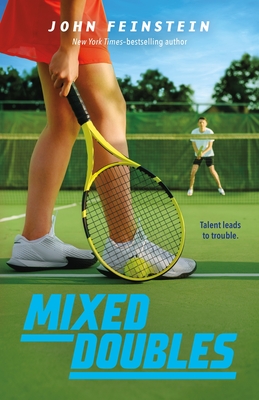 This is book number 3 in the The Benchwarmers Series series.

Jeff and Andi return to serve up trouble in tennis season, in this standalone third middle-grade book in the Benchwarmers series by #1 New York Times–bestselling sportswriter John Feinstein.

Andi Carillo may have been a soccer prodigy and a basketball superstar, but tennis is where she really shines—she’s eleven years old and nationally ranked. For her, the sport is just for fun, but suddenly agents are crawling out of the woodwork to offer her deals. Her best friend, Jeff Michaels, is a pretty talented player himself, but he’s been dropped into the number-two slot in spite of a perfect record—and he’s getting a little jealous of Andi’s star potential. These teammates will have to lean on each other more than ever if they’re going to handle new emotions, face tough competition, and close out this challenging season with a win.

Mixed Doubles is the exhilarating final volume of this popular middle-grade series by a #1 New York Times–bestselling sportswriter.

“Tests and triumphs for two middle schoolers, folded into a harsh indictment of those who would exploit them.” —Kirkus Reviews

“Feinstein emphasizes the value of sportsmanship, friendship, and, most importantly, a real longing to play the game . . . The perfect pick for sports enthusiasts, ­budding sports journalists, or those who might wonder about the tennis world.” —School Library Journal