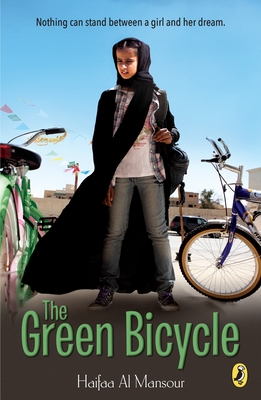 In the vein of Year of the Dog and The Higher Power of Lucky, this Middle Eastern coming-of-age story is told with warmth, spirit, and a mischievous sense of humor

Spunky eleven-year-old Wadjda lives in Riyadh, Saudi Arabia with her parents. She desperately wants a bicycle so that she can race her friend Abdullah, even though it is considered improper for girls to ride bikes. Wadjda earns money for her dream bike by selling homemade bracelets and mixtapes of banned music to her classmates. But after she's caught, she’s forced to turn over a new leaf (sort of), or risk expulsion from school. Still, Wadjda keeps scheming, and with the bicycle so closely in her sights, she will stop at nothing to get what she wants.

Set against the shifting social attitudes of the Middle East, The Green Bicycle explores gender roles, conformity, and the importance of family, all with wit and irresistible heart.

Haifaa Al Mansour is a Saudi Arabian film director and screenwriter, and the winner of an EDA Female Focus Award. Her first feature-length film, “Wadjda,” won the Best International Feature Audience Award at the Los Angeles Film Festival, among other awards, and is the basis of this middle grade novel. Her next film, “A Storm in the Stars” starring Elle Fanning, is set to release in 2016. The Green Bicycle is her debut novel.

"A winningly told story of struggle, solidarity, and optimism."—Kirkus Reviews

"Wadjda is a well-executed character: despite her feisty nature, she’s vulnerable and flawed, and her story will resonate with boys and girls alike."—School Library Journal

"Al Mansour’s debut novel is a revelatory glimpse into a culture unfamiliar to many American readers."—Booklist

"This novel has a cinematic sense of place...accessibly written and stealthily gripping."—Bulletin of the Center for Children's Books

"Fans of feisty protagonists will love this book and root for Wadjda from beginning to end."—School Library Connection

This middle grade novel is based on the acclaimed film Wadjda!

“Wadjda is something rare.”—The Village Voice

“Lively and sly... a cultural thunderclap."—NPR.org
About Kobo eBooks