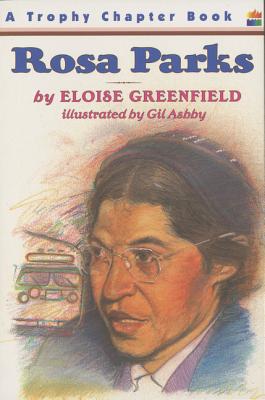 A chapter book biography for early readers about one of the women who sparked the Civil Rights movement, by legendary author Eloise Greenfield and with illustrations by Gil Ashby.

When Rosa Parks was growing up in Montgomery, Alabama, she hated the unfair rules that black people had to live by—like drinking out of special water fountains and riding in the back of the bus. Years later, Rosa Parks changed the lives of African American in Montgomery—and all across America—starting with one courageous act. How could one quiet, gentle woman have started it all? This is her story.

Complete with black-and-white illustrations by Gil Ashby, this chapter book by bestselling and award-winning author Eloise Greenfield is the perfect introduction to Rosa Parks for early readers.

Eloise Greenfield’s first book was published in 1972. She was the author of forty-eight children’s books including Honey, I Love and Other Poems and The Great Migration. She received many awards, including the 2018 Coretta Scott King - Virginia Hamilton Award for Lifetime Achievement. Eloise was a beloved children’s book creator whose pioneering voice, especially for the Black American experience, has made her an inspiration to many generations of readers.

Gil Ashby grew up in Harlem and the Bronx, New York. He studied art at the High School of Art and Design and the School of Visual Arts in New York City. He now is an Associate Professor at the College for Creative Studies. He lives in Jersey City, NJ.

"Greenfield begins with an incident in which Rosa as a child in Montgomery, Alabama, is pushed by a white boy and pushes back; throughout she highlights all the small insults and observed--in­juries that help account for her subject's historic decision, one tired evening on too bus, that she had had enough. The same eye for telling detail distinguishes  Greenfield's account of the progress and eventual triumph of the bus boycott inspired by Mrs. Parks and organized by Dr. King and other ministers." — Kirkus Reviews