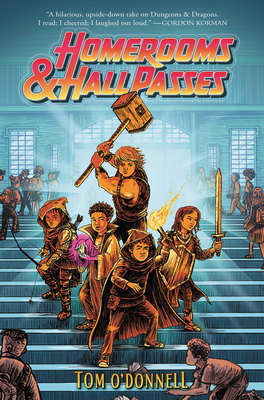 “You can’t help falling in love with this hilarious upside-down take on Dungeons & Dragons. I read; I cheered; I laughed out loud.”—Gordon Korman

In the mystical realm of Bríandalör, every day the brave and the bold delve into hidden temples or forgotten dungeons, battling vile monsters and evil wizards to loot their treasure hoards for sweet, sweet magic items.

But in their free time, our heroes—Thromdurr the mighty barbarian, Devis the shifty thief, Vela the noble paladin, Sorrowshade the Gloom Elf assassin, and Albiorix the (good!) wizard—need to relax and unwind.

That’s why they meet up once a week to play Homerooms & Hall Passes: a role-playing game where they assume the characters of average American eighth graders.

But when the five young adventurers are magically transported into their H&H game by an ancient curse, they must band together to survive their toughest challenge yet: middle school.

Who knew that battling ogres would be easier than passing algebra or navigating the cafeteria social scene? They must use what they’ve learned from playing Homerooms & Hall Passes to figure out how to save their game world (which might actually be real...).

Dungeons & Dragons meets Jumanji in this new, laugh-out-loud adventure series from the author of the beloved Hamstersaurus Rex series.

Tom O’Donnell is the author of the Hamstersaurus Rex series as well as Space Rocks and its sequel, Space Rocks 2: For the Love of Gelo! He has written for the New Yorker, McSweeney’s, and the show TripTank on Comedy Central. His comic strips have been featured in the New York Press and the Village Voice. He lives with his family in Brooklyn, New York. Read more at www.tomisokay.com.

“What could be more treacherous than the realm of Briandalor, with its barbarians, wizards, warriors, assassins, and thieves? How about a modern middle school? You can’t help falling in love with this hilarious upside-down take on Dungeons and Dragons. I read; I cheered; I laughed out loud.” — Gordon Korman

“Played out with impeccable, hilarious logic, the plot leads up an adventuresome learning curve to a brisk battle in a local mall with animated mannequins, a really high-stakes duel involving the evocatively named phone game Oink Pop, and a final realization that Bríandalör’s dangers, lore, glittering treasures, and opportunities for daring exploits seem a bit pale next to those of . . . exotic suburbia.”  — Booklist (starred review)

Praise for Hamstersaurux Rex vs. Squirrel Kong: “O’Donnell writes joyful silliness for readers with a budding adolescent sense of humor, and Squirrel Kong’s absurdism may resonate even with grumpy, neurotic adults. A pure blast of fun for readers who want something amusing and fast-paced.” — School Library Journal