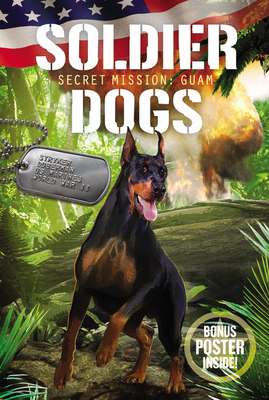 This is book number 3 in the Soldier Dogs series.

Step into the action as the U.S. Marines and the Dobermans of World War II fight to recapture the island of Guam from Japanese troops.

Includes a pull-out map with a collectible poster!

It’s 1944, and the Second Battle of Guam is in full gear. Twelve-year-old Bo just escaped from a work camp, and he’s ready to help kick the enemy off his island. Stryker is an official U.S. Marine Doberman on an urgent mission. When Bo and Stryker meet in the jungle, they team up to help the American forces.

But between painful injuries, raging rivers, wild animals, and a surprise attack on a hospital, their job isn’t easy. With a Japanese soldier hot on their trail, can they deliver their top-secret message in time?

Told in the alternating perspectives of Bo and Stryker, this action-packed adventure is inspired by the real-life Dobermans of World War II who bravely served beside the U.S. Marines.

Marcus Sutter is a former military brat who collects model planes and ships from the WWII era. He lives on a ranch in the Midwest with his family and their three-legged mutt, Mike.