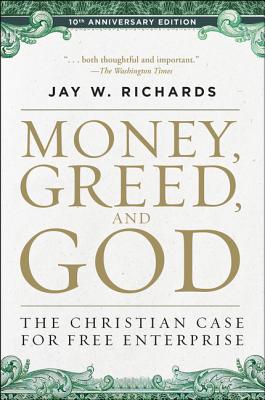 A prominent scholar reveals the surprising ways that capitalism is actually the best way to follow Jesus’s mandates to alleviate poverty and protect our earth.

Christianity generally sees capitalism as either bad because it causes much of the world’s suffering, or good because God wants you to prosper and be rich. But there is a large, growing audience of evangelical and mainline Christians who are deeply uneasy about how to follow Jesus’s mandate to care for the poor and the environment while living with the excesses of capitalism.

Now, a noted Christian scholar argues that there is a middle view that reveals Christianity cannot only accommodate capitalism, but Christian theology can help explain why capitalism works. By highlighting the most common myths committed by Christians when thinking about economics, such as “capitalism is based on greed and over consumption” or “if someone becomes rich that automatically means someone else will become poor,” Money, Guilt, and God equips readers to take practical steps in their own lives to conduct business, worship God, and serve others without falling into the “prosperity gospel” trap.

Jay W. Richards, Ph.D., O.P., is a Research Assistant Professor in the Busch School of Business at The Catholic University of America, a Senior Fellow at the Discovery Institute, and Executive Editor of The Stream. He is author or editor of more than a dozen books including two New York Times bestsellers. His book Money, Greed, and God was a winner of a 2010 Templeton Enterprise Award.

“In Money, Greed, and God, Jay Richards has written the definitive case for capitalism, a crisply written and incisive discourse on wealth and poverty, money and morality for the 21st Century.” — George Gilder, co-founder of the Discovery Institute and author of Wealth and Poverty

“Jay Richards understands the objections to capitalism, and here explains why they do not convince him. The empirical findings revealed in Money, Greed, and God run against those objections.” — Michael Novak, Chair in Religion and Public Policy at the American Enterprise Institute

“In Money, Greed, and God, Jay Richards shows us . . . a capitalism grounded in the truth about human beings as free, morally responsible, co-creators charged with dominion and stewardship of the earth by the loving God to whom we are all ultimately accountable.” — Rev. Robert A. Sirico, President of the Acton Institute

“Money, Greed, and God is both thoughtful and important.” — Washington Times