The End of Oz (Dorothy Must Die #4) (Paperback) 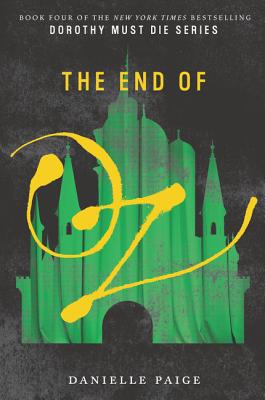 This is book number 4 in the Dorothy Must Die series.

In this dark, action-packed fourth book in the New York Times bestselling Dorothy Must Die series, Amy Gumm travels from Oz to the twisted land of Ev, where she fights to free Oz from evil once and for all.

My name is Amy Gumm. You might remember me as the other girl from Kansas. When a tornado swept me away to the magical land of Oz, I was given a mission: Dorothy must die. That’s right, everyone’s favorite Wicked-Witch-slayer had let the magic of Oz corrupt her. She turned evil. So I killed her.

But just when we thought it was safe to start rebuilding the damaged land of Oz, we were betrayed. Now I’m following the Road of Yellow Brick as it helps me escape toward the mysterious land of Ev, where the Nome King rules a bleak and angry world. And what I’m about to find is shocking: My original mission may not have been successful.

I thought my job was over, but it’s only just beginning. And it’s up to me to foil Dorothy’s plans for revenge—and finally save the land I’ve come to love.

Danielle Paige is a graduate of Columbia University and the author of the New York Times bestselling Dorothy Must Die series. Before turning to young adult literature, she worked in the television industry, where she received a Writers Guild of America Award and was nominated for several Daytime Emmys. She currently lives in New York City.

Praise for the DOROTHY MUST DIE series: “Readers of Baum’s books will take special delight in seeing new twists on the old characters, and they will greet the surprise climactic turnabout with the smugness of insiders.” — Kirkus Reviews

“Dorothy Must Die is kind of the ultimate in girl-powered literature. Here, women and girls are allowed to be anything.” — Nerdist.com

“Gone are the days of rainbows, Lollipop Guilds and pretty much anything to sing about in a major key. For those willing to go on a quest with a heroine more attuned to our times than the Dust Bowl era, there’s no place like it.” — USA Today

“Paige doesn’t hold back in this fast-paced action novel. Give this cinematic upper-YA novel to fans of A. G. Howard’s Splintered, Frank Beddor’s Looking Glass Wars, and TV shows such as Once Upon a Time and Grimm.” — School Library Journal

“L. Frank Baum would be proud because Danielle Paige really makes Oz - even a modern, dystopian version of it - her own in the enjoyable sequel to Dorothy Must Die.” — USA Today

“Paige is creating a rather brilliantly twisted version of the familiar world of Oz.” — Bulletin of the Center for Children’s Books

“Paige has embellished upon the original Wizard of Oz story to create a completely new, even more bizarre Oz and cast of characters. Her world building is fascinating.” — ALA Booklist

“For anyone who likes a good story turned on its head, Dorothy Must Die is a must-read.” — Huffington Post

“The Wizard of Oz as you’ve never seen it.” — Teen Vogue