Warriors: A Vision of Shadows #2: Thunder and Shadow (Hardcover) 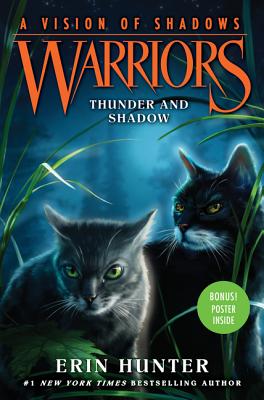 This is book number 2 in the Warriors: A Vision of Shadows series.

Erin Hunter’s #1 bestselling Warriors series continues with the second book in the A Vision of Shadows arc.

This hardcover edition also includes a double-sided jacket with a bonus poster!

Nearly a moon has passed since Alderpaw returned from his journey to SkyClan’s gorge, where he found the territory taken over by rogues. Now the same vicious cats that drove out SkyClan have traced Alderpaw’s path back to the lake… and ShadowClan may be the next to fall.