Pagans: The End of Traditional Religion and the Rise of Christianity (Hardcover) 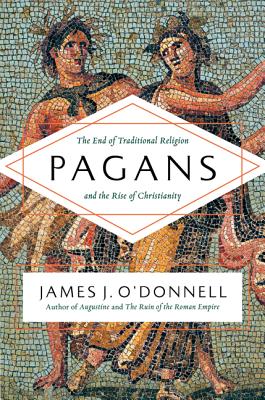 A provocative and contrarian religious history that charts the rise of Christianity from the point of view of traditional” religion from the religious scholar and critically acclaimed author of Augustine.

Pagans explores the rise of Christianity from a surprising and unique viewpoint: that of the people who witnessed their ways of life destroyed by what seemed then a powerful religious cult. These “pagans” were actually pious Greeks, Romans, Syrians, and Gauls who observed the traditions of their ancestors. To these devout polytheists, Christians who worshipped only one deity were immoral atheists who believed that a splash of water on the deathbed could erase a lifetime of sin.

Religious scholar James J. O’Donnell takes us on a lively tour of the Ancient Roman world through the fourth century CE, when Romans of every nationality, social class, and religious preference found their world suddenly constrained by rulers who preferred a strange new god. Some joined this new cult, while others denied its power, erroneously believing it was little more than a passing fad.

In Pagans, O’Donnell brings to life various pagan rites and essential features of Roman religion and life, offers fresh portraits of iconic historical figures, including Constantine, Julian, and Augustine, and explores important themes—Rome versus the east, civilization versus barbarism, plurality versus unity, rich versus poor, and tradition versus innovation—in this startling account.

James J. O'donnell is a classicist who served for ten years as Provost of Georgetown University and is now University Librarian at Arizona State University. He is the author of several books including Augustine, The Ruin of the Roman Empire, and Avatars of the Word. He is the former president of the American Philological Association, a Fellow of the Medieval Academy of America, and the chair of the Board of Directors of the American Council of Learned Societies. He is seen here at an ancient monastery on the eastern frontier of the Roman Empire, in Syria.

“Trenchantly interprets how an oddball religious cult became the official faith of Rome. . . . It makes for a thoughtful tour of Rome.”
— New York Times Book Review

“Mr. O’Donnell tells the familiar story of Christianity’s heroic age of expansion, from Constantine to Theodosius, with verve and wit.”
— Wall Street Journal

“[A] fascinating and insightful study of the pluralistic pagan gods. This book is a must read for everyone who is interested in either general history or the history of Christianity in particular.”
— Washington Book Review

“Although [Pagans] is serious scholarship, it does not take itself too seriously. The result is an engaging view of antiquity few of us have seen.
— Booklist
About Kobo eBooks